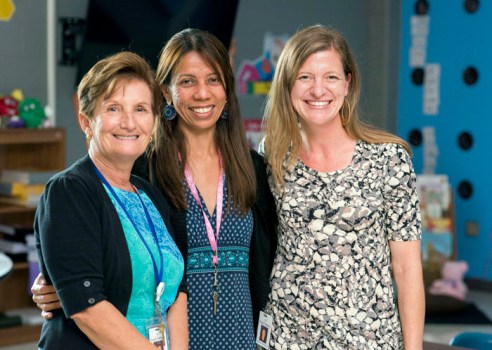 SALISBURY – Isenberg Elementary School began its second semester of the 2019-2020 with a pilot cohort of students in its Dual Language Immersion Academy, and so far the program has been a success, says Principal Marvin Moore.

Here is how it works: two cohorts of kindergarten students have two main teachers they alternate between. One teaches in Spanish, and the other in English. The next day, they switch. It’s a departure from the traditional elementary school model, where each class has a single main teacher for the entire year.

Most of the students have never spoken or taken any Spanish lessons before, so they needed to spend some time adjusting and working on basics. When students ask to go to the bathroom, for example, Sandra Yepes, the Spanish-speaking half of the teaching duo at Isenberg, reminds them to speak in Spanish.

After a while, teachers say, they began to follow along with no English required. So, they’ve dropped “can I go to the bathroom” when necessary and adopted “¿Puedo usar el baño?”

The two classes of 24 students each, 48 total, represent just the beginning of the program. Beginning next year, all students will continue the same method of study in first grade, and a new group of kindergartners will come in. The school will be creating a team for each grade level for the program, eventually resulting in it being offered K-5.

Teachers, Yepes and Heather Nardone, plan together and coordinate their lessons, but the curriculum is the same for Isenberg students outside the program. Moore said the difference is half of lessons are taught in Spanish. The pair are also supported by the company the school works with to create the program.

“What I try to do is make sure we are not a school divided,” Moore said.

Moore said the school wanted to do something different, and the district-wide renewal for Rowan-Salisbury schools has given the opportunities to be a more global school.

All staff at Isenberg is working on global goals and global competencies for students. Trips, video calls to students in other countries and global days with workshops where the kids get to hear about different countries are all part of what the school does.

“We are a melting pot, and a lot of times where we are in America, we are considered a first-world program,” Moore said, adding students who travel have higher earning potential, better academics and more empathy.

There is a waitlist for the dual-language immersion program. The first parent session for the academy is on Feb. 5, and parents can begin applying that day. That process will continue until March 26. Families will be notified if their student will be able to enroll in the program between March 30 and April 3.