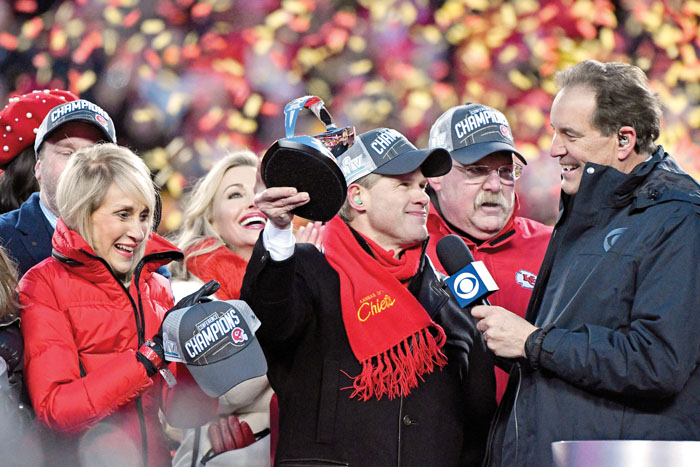 KANSAS CITY, Mo. (AP) — Clark Hunt remembers well the celebrations four years ago that surrounded the golden anniversary of the Super Bowl, the championship game whose name was coined by his late father and Kansas City Chiefs founder Lamar Hunt.

One moment stands out more than the rest. It had to do with Hunt’s mother, Norma, who has been to every championship game since the Chiefs played the Green Bay Packers in the first one in 1967.

“Clark,” she said shortly afterward, “it sure would be nice if we could play in this game once while I’m still able to go.”

She’s finally getting her wish.

On Sunday, the most visible face of the Chiefs ownership family took center stage when Clark Hunt raised the AFC title trophy — the Lamar Hunt Trophy — after a 35-24 victory over Tennessee. Right beside Clark and celebrating the return of the franchise to the big game for the first time in 50 years was his mother, and his siblings weren’t far away.

Football is a family affair for the Hunts. Not only did Lamar found the franchise but he was among the eight owners in the “Foolish Club” who founded the AFL, then barged their way into a unified NFL. Clark was not yet 2 years old when the Chiefs played in the first Super Bowl, and he has only faint memories of attending the 1970 game, when the Chiefs beat the Minnesota Vikings to win their only championship.

“I was at that game and I have a photo,” he said, “so I hate to say that I don’t really remember it. I was 4 or 5 years old. Actually, the first game that I remember is the Christmas Day game a few years after” — the Chiefs lost to the Dolphins in the 1971 playoffs in the longest game in NFL history — “which isn’t a great one to have as your first memory. I’m grateful to block that out with what we’re going to do in Miami in a couple of weeks.”

Norma Hunt was a schoolteacher who also worked as a hostess for the Dallas Texans when she met and fell in love with Lamar. The franchise would later move to Kansas City and become the Chiefs. And when the family patriarch died in 2006, the franchise passed into the hands of his children.

Much like his father, who was so integral in league affairs for nearly four decades, Clark quickly became one of the go-to voices among NFL owners when issues such as the collective bargaining agreement arose. His even demeanor, thoughtful disposition and acute business acumen also have made him a sounding board for Commissioner Roger Goodell.

Yet for all his accomplishments, the one thing Clark had never done was follow his team all the way to the Super Bowl.

There had been close calls over the years. The teams of Marty Schottenheimer throughout the 1990s were always on the cusp of greatness, and Dick Vermeil kept the winning tradition in Kansas City. But when Andy Reid took the Chiefs to the AFC title game last year, and ultimately lost to the Patriots in overtime thanks partly to a coin flip and an offside penalty, Hunt and his family could be forgiven for thinking they were just a little bit jinxed.

“It was heart-breaking,” Hunt said, “and we were playing a franchise that has been tremendously successful over the last decade-plus. And there was probably a question mark in the back of our heads to whether we could really beat them because it had been so many times where you thought the Patriots were out, but sure enough they found a way to win it and go on to win the Super Bowl. I think the experience of having played in the game last year helped the entire organization, particularly the players and coaches. I think they had a little bit more confidence this year.”

Given all those years of disappointment, it was little surprise that Reid thanked the Hunt family first when the Chiefs finally broke through Sunday. And it’s why even the newest members of the team knew the meaning of it for the owners.

“It’s been 50 years since we brought this trophy back to Kansas City,” said Chiefs safety Tyrann Mathieu, who joined the team last offseason. “It’s about the people of Kansas City, everything that they sacrificed, everything they endured for the last 50 years, and it’s ultimately about Lamar Hunt.”

We wouldn’t be here without him. We wish he was here right now, I think Clark is doing a great job, and this is what it’s about: Lamar Hunt.”

Hunt rarely speaks publicly — usually just a handful of times each year. But when he does speak, he is often candid. So when Hunt stood on a sweltering practice field at Missouri Western State University in the first few days of training camp last summer, he made it clear that getting close to an AFC championship wasn’t enough.

He wanted to finally win the game that had eluded him so long.

Hunt wanted to give his mom a chance to watch their team playing for it all.

“Last year, we were glad to be there, but we were also very disappointed that we weren’t playing in THE game. It’s going to be a very different experience this year,” he said. “We’ve got that checked off but at the end of the day, we’ve still got a big goal to accomplish. At the beginning of the season, I talked to players about our goals during the year. Making the playoffs is goal number one. Bringing this (AFC championship) trophy home to Kansas City is goal number two. We’ve got those done. Our big goal left is to bring another Lombardi trophy back to Kansas City.”