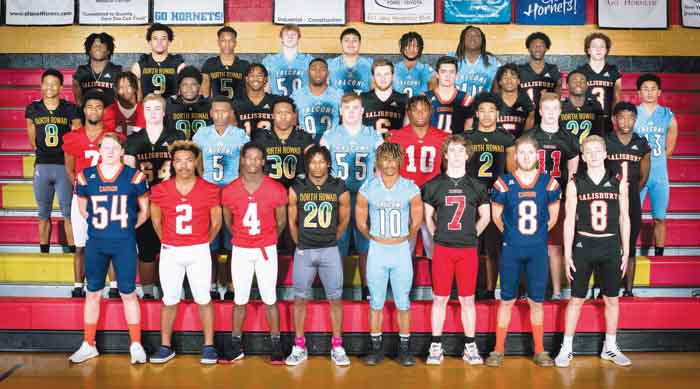 SALISBURY —  Salisbury’s run to the 2AA state championship game was the obvious highlight of a banner 2019 season for Rowan County football.

Rowan teams combined for 40 wins, the first time the six county schools have reached the 40-victory plateau since 2012, when the county racked up 43.

Besides Salisbury’s school-record-tying 13 wins this season, West Rowan and North Rowan won nine games apiece. The county hadn’t had three teams get to the nine-win level in the same year since 2010 when West and Salisbury won state championships and Carson chipped in with a school-record 10 triumphs.

In the 2019 playoffs, three Rowan teams reached the third round for the first time ever. West and Salisbury had the distinction of going on the road and beating No. 1 seeds in the playoffs. West produced a remarkable offensive performance at Crest, while Salisbury turned in a defensive masterpiece at Randleman.

Rowan teams compete in three conferences. North won the Yadkin Valley Conference championship. West went to overtime before losing to Statesville in a thriller that decided the North Piedmont Conference. Salisbury tied for second place in the Central Carolina Conference, but was arguably the best team. Salisbury was playing long after everyone else was done.

Coming up with an all-county team is always an undertaking. With three exceptional teams and some outstanding individuals on the other three squads, it was even more of a challenge than normal.

Thirty-eight Rowan players made all-conference. Most, but not all of them, are on the all-county team.

There also are cases every year where the Post has to make a decision based on what we’ve seen and what the stats say. Nathan Chrismon got hurt in South’s eighth game, but was clearly South’s most impactful player before he went down. He still led South in touchdowns, and while he didn’t make all-conference, he’s on our all-county team. Carson’s Andrew Rollins had his team’s most impressive defensive stats, so he’s on all-county, even though he wasn’t all-conference. East’s Isa’ah Cauthen wasn’t one of East’s four All-NPC players, but the writers who saw the Mustangs thought he was a no-brainer for all-county.

The final breakdown of this all-county team was Salisbury (11), West Rowan (10), North Rowan (8), East Rowan (5), Carson (3) and South Rowan (2), which resembles the number of wins the teams had. West and North both won nine games, but West beat North, 34-0, so we saw some separation between the Falcons and Cavaliers.

West Rowan (No. 60) ended up with the county’s highest MaxPreps ranking. Salisbury was No. 75. That would’ve been an interesting matchup. Both went undefeated in county games.

With 1,850 yards, Houston, a converted receiver, had the ninth-biggest rushing season in county history. Pinckney had 1,830 rushing yards in only 11 games, breaking East’s school record. Wilson surpassed 4,000 rushing yards for his career and totaled 67 touchdowns. McLean rushed for 1,522 yards, including 184 in an epic win at Randleman. Courtney gave the county five 1,000-yard rushers.

Despite missing two games, Honeycutt topped 1,500 passing yards and 600 rushing yards. Sims, who missed one game, threw for 1,120 yards and ran for 300. He threw only four picks in the regular season. Huffman led the county with 13 TD passes.

Tayor had 44 catches for 697 yards and eight TDs, leading the county in all three categories. Robinson had 37 catches, 433 yards and 3 TDs. Jones had 17 catches for 246 yards and 5 TDs and also shined as a “Wildcat” quarterback in several games.

Shrine Bowler Hassard was the county’s top guy, but Berrios, a big tackle, wasn’t far behind and also will be a college player. Martin also was part of a powerful offensive line that generated some staggering rushing numbers. West ran for 460 yards against East Rowan. Barringer, a two-way player, was a leader for Carson, and van der Poel had a similar role for the Hornets.

Cruz handled kickoff, placekicking and punting duties for the Falcons. He kicked nine field goals and 46 PATs and enjoyed a 200-point career.

Chrismon had six receiving, two rushing and one return TD when he was injured. Cauthen had nine touchdowns and three 2-point conversions as a back and lots of tackles as a linebacker.

McCombs, a transfer from West Forsyth, became a leader for West’s defense. Biggers is huge (6-7, 300-plus) and impossible to block and has D-I offers. Jacobs had a game-changing fumble return TD against South Iredell. Turner clogged the middle for North, while Jefferson created havoc on the edge with 11 sacks. Clay, Shellhorn and Hall were all destructive for a Salisbury defense that didn’t allow a point in seven games. Clay was terrific in the championship game loss vs. Shelby.

Norman, Goodine and Suddarth were their team’s leading tacklers. Walker’s versatility allowed Salisbury’s defense to do a lot of different things. He has D-I offers. Rollins played linebacker until injuries forced him to move to defensive end. He had 15 tackles for loss, five fumble recoveries, two forced fumbles and seven sacks.