KANNAPOLIS – Former Kannapolis Mayor Bob Misenheimer died Tuesday, Jan. 21, at the age of 88, after a period of failing health.

Misenheimer joined the Kannapolis City Council in 1989, and was elected to serve two terms as mayor, from 2005-2013. 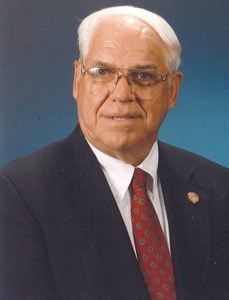 His tenure as mayor included the following accomplishments: Securing a permanent source of drinking water for the city with the Interbasin Transfer Agreement; breaking ground on the North Carolina Research Campus; construction of the Kannapolis City Hall and Police Headquarters; celebrating the 100th birthday of the city of Kannapolis and sponsoring the 100th Habitat for Humanity House in Cabarrus County.

Before he became mayor, he was a teacher, assistant principal and principal in the Kannapolis City School System from 1957-1980, and a principal in the Cabarrus County School System from 1980-1993. He served on the Rowan-Cabarrus Community College Board of Trustees for 12 years, beginning in 2008. For 50 years, he served his church, New Gilead Reformed Church,  as a deacon, elder,  treasurer and chair of the Church and Ministry Committee.

He was married to Bernie Hileman for 62 years and has two children, Mary and Kathy, and three grandchildren, Robert Zieser -Misenheimer, Elizabeth Zieser-Misenheimer and Robinson Price.

“I was saddened by the news of the passing of Bob Misenheimer today. As a teacher and a principal, he devoted his life to educating children to ensure they had the opportunities they needed to succeed. He was dedicated to the city of Kannapolis. He spent more than 24 years moving us forward as a city. The number of times he and I would collaborate on an issue that we deemed important for Kannapolis are innumerable. When I last saw him, he was excited about the direction that our community was headed. Thanks Bob, for the devotion that you had for the future of Kannapolis,” Kannapolis Mayor Darrell Hinnant commented. “Our condolences to Bernie, his daughters, and grandchildren.