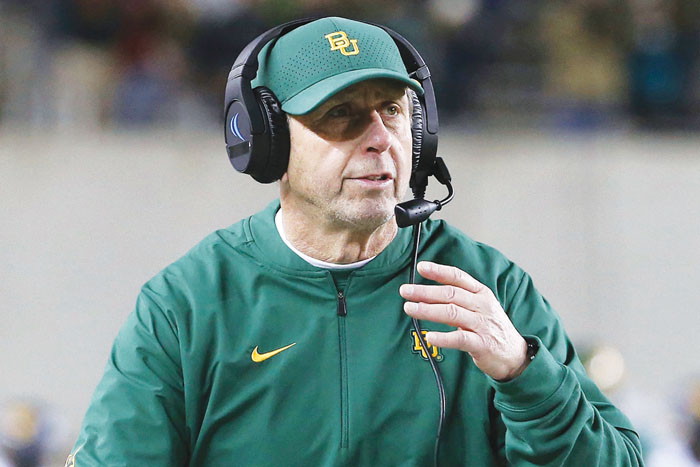 By STEVE REED AP Sports Writer
CHARLOTTE (AP) — Phil Snow is rejoining head coach Matt Rhule in Carolina as the new Panthers defensive coordinator.
Snow previously served as defensive coordinator under Rhule at Baylor from 2017-19 and Temple from 2013-16.
Snow has spent 37 seasons coaching college football, serving as a defensive coordinator at seven previous schools, including UCLA, Washington, Arizona State and Boise State. He also worked as an assistant coach with the Detroit Lions for four seasons (2005-08).
Under Snow, Baylor ranked 41st in the nation in total defense last season, and finished second in takeaways with 30, third in interceptions with 17 and eighth in sacks per game at 3.3. Baylor defensive tackle James Lynch finished fifth in the nation in sacks (13 1/2) and was the Big 12 Defensive Player of the Year, while cornerback Grayland Arnold rank fifth in interceptions (six).
Before joining Rhule at Baylor, Snow spent four seasons working for him at Temple. The Owls led the American Athletic Conference in defense twice, with the 2016 team ranked third nationally in defense allowing just 282.5 yards per game and 11th in scoring at 18.4 points per game.
Rhule and Snow first coached together at UCLA in 2001 when Snow was the defensive coordinator and Rhule was the defensive line coach. The Bruins led the conference in total defense that season.
The addition of Snow means the Panthers now have three coaches from the college ranks at their top three spots — Rhule as head coach, Snow as defensive coordinator and Joe Brady, who came from LSU, serving as offensive coordinator.
___
More AP NFL: https://apnews.com/NFL and https://twitter.com/AP_NFL