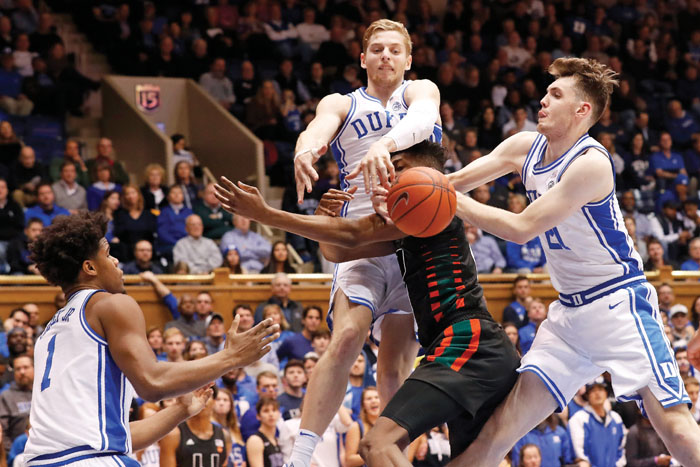 By AARON BEARD AP Basketball Writer
DURHAM (AP) — Freshman Matthew Hurt scored 15 of his 22 points in a dominating first half to help No. 8 Duke beat Miami 89-59 on Tuesday night.
Tre Jones added 16 points for the Blue Devils (16-3, 6-2 Atlantic Coast Conference), who entered the game coming off their first back-to-back losses since February 2018. They were never in any danger in this one, following a 33-point win in the first meeting by turning this one into another blowout by midway through the opening half.
Duke knocked down open look after open look against Miami’s zone, starting with Hurt burying a 3 from the left corner on the Blue Devils’ first possession then following with another — in which he pumpfaked Sam Waardenburg off his feet to set up the shot — from the opposite wing on the next possession.
And the Blue Devils didn’t stop hitting, either, in that opening half. The Blue Devils shot 52% and hit 9 of 17 3-pointers in the first 20 minutes, then cruised the rest of the way to put an emphatic end to a modest skid.
Rodney Miller had 13 points and 13 rebounds for the Hurricanes (10-8, 2-6) who missed 25 of their first 31 shots as this game got away quickly. Miami came in shooting 45% and ranked in the top 30 nationally of KenPom’s adjusted offensive efficiency in rankings, but the Hurricanes never found any type of offensive rhythm that would allow them to hang in against Duke’s early onslaught.
The Hurricanes finished the game shooting 30%.
BIG PICTURE
Miami: The Hurricanes have lost three straight and five of six, a skid that includes a 95-62 home loss to the Blue Devils on Jan 4. This one wasn’t much better, and it didn’t help that leading scorer Chris Lykes struggled early. The 5-foot-7 junior came in averaging 16.1 points but missed his first eight shots and didn’t score or manage a field goal until early in the second half — by then Miami was down 28 — before finishing with nine points on 3-for-13 shooting.
Duke: The Blue Devils were coming off a loss at Clemson followed by Saturday’s home game against now-No. 6 Louisville, but cleaned up some issues from those games. They had a combined 31 turnovers in the two losses, then shot just 37% against the Cardinals while making just 6 of 25 from 3-point range. They surpassed that number long before halftime Tuesday, finishing the game shooting 53% and making 11 of 25 3s while committing 10 turnovers.
UP NEXT
Miami: The Hurricanes visit North Carolina on Saturday.
Duke: The Blue Devils hosts Pittsburgh, led by former Duke player and assistant Jeff Capel, next Tuesday.
___
More AP college basketball: http://apnews.com/Collegebasketball and http://www.twitter.com/AP_Top25
___
Follow Aaron Beard on Twitter at http://www.twitter.com/aaronbeardap