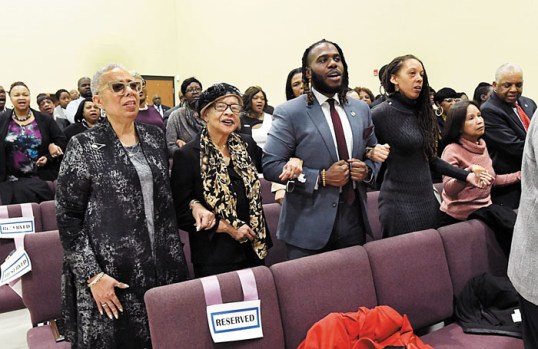 Singing "We Shall Overcome" at the Benedictory music. photo by Wayne Hinshaw, for the Salisbury Post

Singing "We Shall Overcome" at the Benedictory music. photo by Wayne Hinshaw, for the Salisbury Post 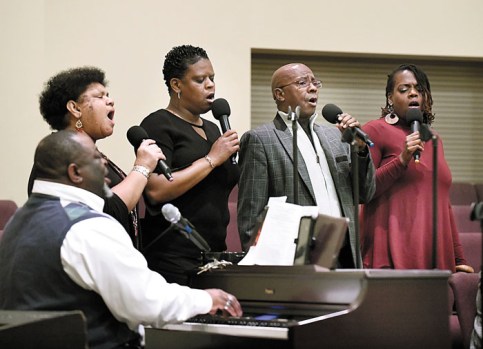 The Jerusalem Baptist Church Praise Team leading the music at the MLK Humanitarian Awards. photo by Wayne Hinshaw, for the Salisbury Post 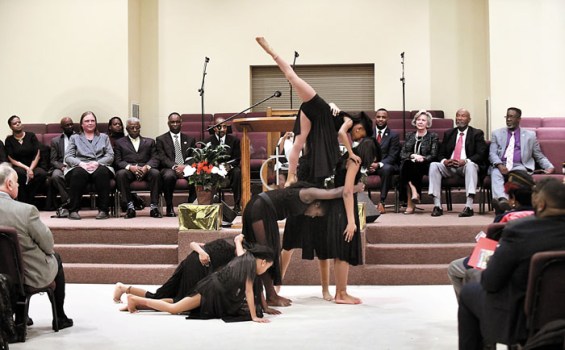 The MLK Specialty Dancers of Triple Threat Dance and Charm at the MLK Humanitarian Awards. photo by Wayne Hinshaw, for the Salisbury Post 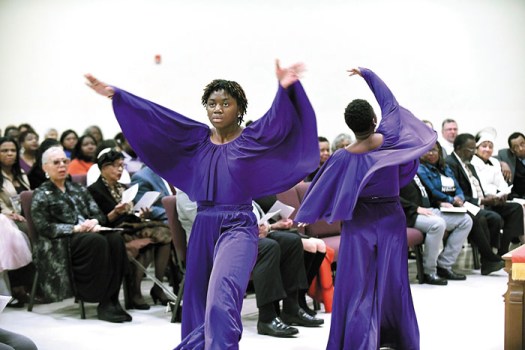 The Birthday Celebration and Humanitarian Awards Day at Mount Zion Missionary Baptist has been held in honor of King has been held for more than 40 years. The program began as a project of Mount Zion’s late pastor S.R. Johnson Jr. and has continued on with his successor, Rev. Nilous Avery. It recognizes people in the community who go above and beyond to impact the lives of others.

The awards can go to anyone involved with volunteerism or other good work in the community.

“When King was alive, he had a lot of enemies,” Avery said, “including some of his own close associates, who didn’t always approve of what he did and would try to get him to pull back a little bit.”

Avery said King would not back down and wait for change to come and that it was time to do what was right. Avery added that when people stand for what they believe is right, they may not be popular, but holding to your principals will be impactful.

“King really didn’t want to be in the forefront,” Avery said. “He really just wanted to be a pastor, raise a family and live his life. He could have gone anywhere in the country with his Ph.D. and made a lot of money and lived comfortably, but he felt it was a call on his life to use the gifts he had to help people who were distressed.”

During the program, Avery commented on the challenges the program faced when it began. The Rowan County Sheriff’s Office provided security for the church and the program for years while local Ku Klux Klan members marched downtown. Avery said the church has grown while the Klan’s presence has faded.

Punctuated with songs and a sermon, the nearly three-hour affair blended the church with patriotism and community service. The pledge of allegiance was recited toward the beginning of the program along with a presentation of the colors. The Jerusalem Baptist Church Praise Team provided music throughout the program.

The awards were only one part of the program. Three scholarships were presented in memory of of S.R. and Eva Johnson. Deondre Banner, Tamia Brown and Kiersten Hyde all received scholarships. Banner and Hyde were awarded scholarships to attend Rowan-Cabarrus Community College and Brown to attend Winston-Salem State University.

Brinkley kept returning to Matthew 23:11, quoted from the King James Bible: “But he that is greatest among you shall be your servant.”

This line drove Brinkley to reflect on some people who are considered the greatest at what they did, the “G.O.A.T.,” or greatest of all time.

A pair of basketball legends, LeBron James and Michael Jordan, were a point of comparison for Brinkley. Brinkley made her preference for James known, receiving a mixed reaction from the crowd. Jordan is well known for his college basketball career at the University of North Carolina at Chapel Hill. Brinkley pointed out James has invested heavily with both time and money in his home town of Akron, Ohio.

Ultimately, Brinkley came around to pronouncing Jesus as the G.O.A.T., pointing to him as the defining servant.

Award recipients are as follows:

• John Daniels’ was presented with a humanitarian award by Michael Cartwright. Daniels is a Livingstone College alumnus and a volunteer assistant coach for its women’s tennis team. He graduated from the college in 1965, played on the men’s tennis team from 1963 to 1965 and volunteered as a sports photographer at the college for more than 20 years. He was head coach for the women’s tennis team in 2019. Daniels spent his career at Kosa in Salisbury as a chemist and administrator before retiring in 2004.

• Yvonne Dickson was presented with a humanitarian award by Alisha Gatewood. Dixon spent her career as a nurse working for Novant Health, was referenced as the “nurse’s nurse” and has been heavily involved with local health initiatives.

• Mahogany Koontz was presented with a humanitarian award by Phylicia Robinson. Koontz was a student at Rowan County Early College and a Miss Rowan County Veteran contestant in 2019.

• John Noble was presented with a humanitarian award by Willie Edley. Noble spent 46 years with Rowan County Sheriff’s Office and serves on the East Spencer Board of Aldermen.

• Rev. Anthony and Toni Smith were presented with a single award by April Byrd. The Smiths are known for leading Mission House Church in Salisbury. Anthony is also a Navy veteran.

• The last award was presented to Gerry Wood by Lenore Bronson. Wood started his business in car sales with a single, small dealership. Over the years, he has expanded to own several. Wood’s philanthropic efforts include coordinating with the Salisbury Police Department to give away bicycles and teddy bears to children. In December, the program gave away 140 bicycles and 100 teddy bears.

The program ended with the singing of “We Shall Overcome,” which King quoted during his last speech.