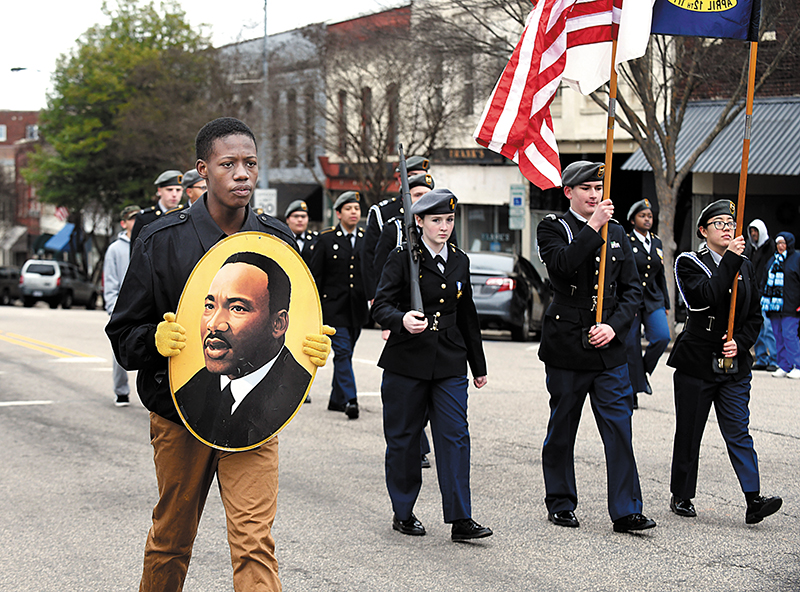 The West Rowan High JROTC in the MLK, Jr. parade. photo by Wayne Hinshaw, for the Salisbury Post

As the parade started, King’s “I Have a Dream” speech could be heard over loudspeakers. Several local dance groups and the Livingstone College marching band stopped at the intersection of Main Street and Innes Street to perform for the crowd. The procession was accompanied by classic hits from black artists and included representation from a number of organizations in Rowan County. There were, of course, some firetrucks as well.

This was all leading up to a party at Salisbury Civic Center, where groups from the parade performed indoors and the city provided free food for everyone who attended.

But the party was more than just a good time. There was also a resource fair and school supplies on offer.

Human Relations Council and MLK Committee member Dennis Rivers said there were more than 100 backpacks full of supplies to give out, and more supplies for when the backpacks were exhausted. Judging by the crowd, Rivers estimated more than 200 people could get supplies.

Rivers said this year’s turnout for the parade and post-parade party was larger than the last.

“We had people standing on both sides of Main Street, from Council Street all the way down by Bank Street, which was awesome,” Rivers said.

The crowd at the parade carried over to the civic center, filling the venue portion of the building that housed the resource fair and performances.

There were about 30 volunteers involved with the event, some of whom have also helped organize the MLK breakfast Monday, on Martin Luther King Jr. Day. There are other events this weekend to celebrate King’s legacy over the weekend, including the MLK Humanitarian awards at Mount Zion Missionary Baptist Church on Sunday.

Gemale Black, Salisbury-Rowan NAACP president and a member of the Human Relations Council, said it was good to bring the community together to remember King’s work during the entire year and not just around the holiday.

Rivers said his favorite part of the day was also seeing the community come together.

“It’s a three-day weekend, so most people want to just stay at home and relax, but they took it upon themselves to celebrate Dr. King’s legacy,” Rivers said. “That’s what I really like. They take personal time away.”

As soon as the celebration weekend ends, the committee in charge of the festivities begins preparing for next year.

Alice Suber has been a volunteer with the Human Relations Council for the previous eight years. She wears a few hats for the weekend. Among her responsibilities are the parade registration and helping decorate the tables for the breakfast.

“I enjoy it,” Suber said. “I enjoy seeing the faces, I enjoy how everything comes together, I enjoy the kids coming out. Each year seems to get bigger and bigger.”