A camaraderie: Old Armor Beer Company opens to give back to fellow veterans 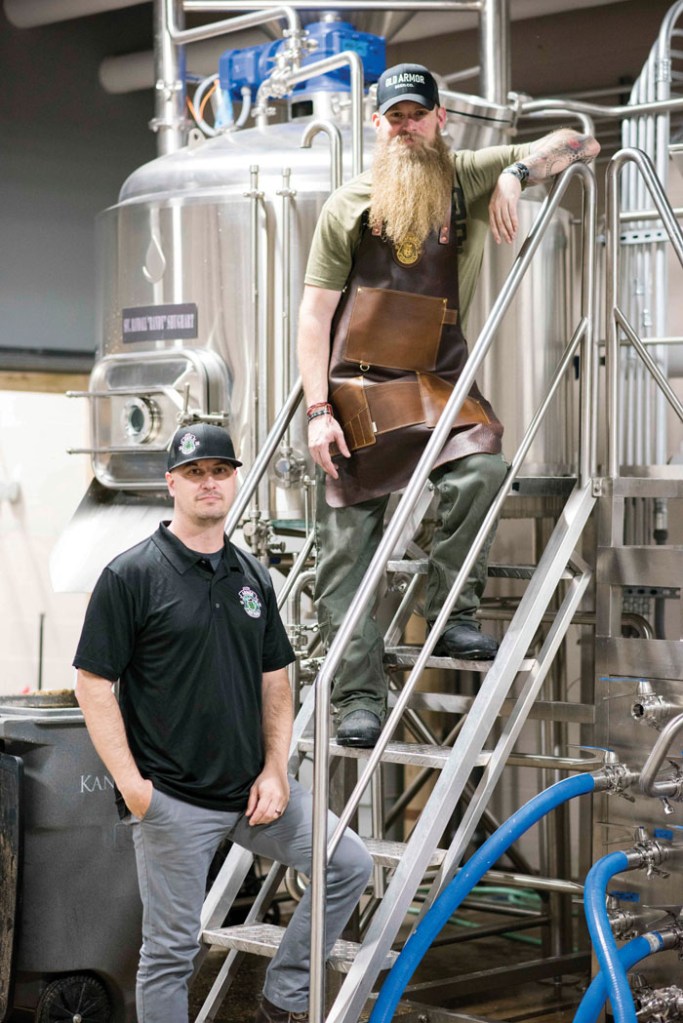 JON C. LAKEY/SALISBURY POST Kyle Lingafelt (left) and Brew Master Stefan Perrine (right) along with Dick Bradley (not pictured), US military veterans, co-own the Old Armor Beer Company located in Kannapolis’ revitalization project across from the Sports and Entertainment Venus where the Kannapolis Cannon Ballers will play baseball come spring. On a recent Thursday a large crowd was on hand for Trivia night, food truck and of course beers. Kannapolis,North Carolina,1/16/20.

The brewery, at 211 West Ave., is the first business to join the Kannapolis revitalization project and had a soft opening in December. A grand opening is being planned for later.

The name fits the decor, with pictures of armor from World War I. The trunks used by Lingafelt, Perrine and Bradley are used as coffee tables at the front of the brewery. The tables are named after military bases and the beers have military themes. Even the tanks are named after prominent veterans.

In less than a month, with no advertising and only posting on social media, they have already sold out of several beers.

But the bigger plan is to do more than just be a successful brewery.

“The brewery was never supposed to be a big thing,” Lingafelt said. “The brew was the platform so we could help out other veterans. We knew this could be a successful business. We, as individuals, have a limited capacity of what we can do, but if we as veterans open a veterans-owned brewery that says what other veterans need help, then we can make a bigger impact.”

They started a pay-it-forward board where customers can buy a beer for a military member from any of the branches, or even for a first responder.

“It’s what we could do right off the bat,” Lingafelt said.

They have started talking to foundations supporting veterans, with the idea of creating a special beer just for them. They would promote it and give proceeds back to the foundation after factoring in the brewing costs.

“That’s what we want to do,” Lingafelt said. “Being in a brewery is the fun part. It helps us get to that and make a bigger impact.”

Camaraderie is evident throughout the brewery. The owners swap stories even though they never served together and customers who come in often quickly bond with one another and the owners/veterans.

“It’s just instantly having a friend that you don’t know from Adam, but you have something in common,” Lingafelt said.

He added it was stressful getting to opening day since their goal was October, but they actually began serving on Dec. 22. Getting power and water to the building took extra time because they had to go through the connecting buildings.

“Stefan says all the time we would have not been open by December and we probably would have closed down before we opened with all the stressors if we didn’t already know how to deal with some of these,” Lingafelt said.

Their backgrounds helped them get through.

“It goes back to our military, if something needs to be done, we’re going to work until it’s done. That’s been our mentality across this whole way,” he said.

The brewery had some days when they were slammed already, but it’s only the beginning.

“We’re excited to see it — it means we’re doing something right,” he said. “Are we doing everything right? No, but we’re going to keep enhancing here, keep trying to make it better, like adding the beer garden, adding different varieties of beer and just adding different aspects as we go forward.”

The beer garden will open in late spring or early summer. Then they will begin working to open a downstairs barrel room and a speakeasy in the   13,000-square-foot building.

They also will expand the number of taps to 16, with two guest taps, one being a cider. They will add some non-alcoholic beers as well.

“Our expertise lies right back there in the tanks,” Lingafelt said.

The location made sense for the owners. They looked at more than 1,000 buildings before deciding on the former Rotary Building.

“That unique building in that unique place that had the need for what we are trying to do and be supportive,” Lingafelt said.

The City of Kannapolis was also welcoming to them as veterans. He said some places they visited seemed like they didn’t care that veterans were behind the business.

“Coming here, Kannapolis has just been super supportive,” said Lingafelt, who is a native of Cabarrus County. “You can truly see that they enjoy that we are doing well and we’re bringing something to the community and adding value to the area.”

Lingafelt said it’s a lot of word of mouth bringing people in and they wanted the brewery to be a community center since the start. “It’s been exactly that from our run club on Monday nights all the way through Sunday. You’ll see whole families in here from the grandparents all the way down to a 1-year old or a newborn sitting here,” he said.