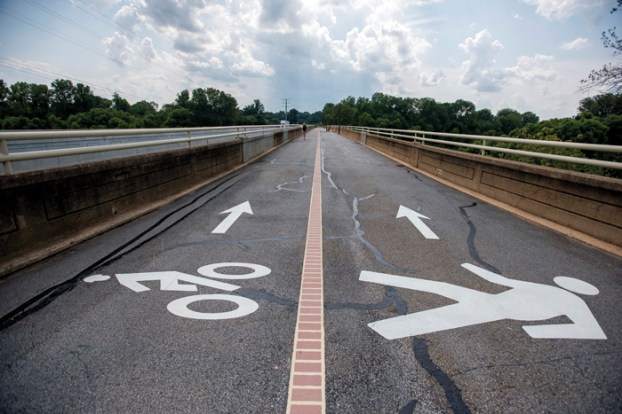 $10,000 put up for initial phases of Rowan trail head at Wil-Cox Bridge

SPENCER — A nonprofit group has agreed to fund survey work and landscape design for the development of a park on the Rowan County side of the Wil-Cox Bridge at the Yadkin River.

The bridge has been preserved, and the land on the Davidson County side was developed into a park that opened in June. The Rowan side, meanwhile, was the former home of the N.C. Finishing Co. and has yet to be developed. There also is no maintained pathway to the bridge on this side.

Spencer Town Planner Joe Morris said right of way on the site is partly owned by the North Carolina Department of Transportation. In December, Spencer agreed to accept surplus right of way, have the site surveyed and put up markers to show the boundary.

A local group called Friends of Rowan has agreed to pay for the survey and preliminary design of the trail head, which the town accepted.

Ronnie Smith, of Friends of Rowan, said the estimate for surveying the property and providing an initial landscape engineering plan is $10,000. Smith said he worked with Davidson County on development of the other side of the park for the past few years.

Friends of Rowan is also accepting contributions for the development of the site, which the group is matching.

“If you go out into the park, you will see an absolutely magnificent park on the Davidson County side,” Smith said. But if you cross the bridge into Rowan County, the sight is largely mud, weeds and the deteriorating piece of property that used to be the finishing plant.

Smith said he is interested in the land for a few reasons. One is its rich history as a military site and important trade route. He said he spent a lot of time on the river as a child and has fond memories of the area.

“I think this is one of the best projects right now that we could invest our time and money in that would really enhance the area,” Smith said.

Plans for the first phase of the project include developing the entrance to Rowan County. The second phase would be to develop the property on both sides of the right of way. Smith said a distant dream would be to acquire more than 170 acres of the old finishing plant property and develop a number of different projects there.

The developments around the bridge have attracted the interest of the Carolina Thread Trail, a project of the Catawba Lands Conservancy to create a network of trails in a two-state, 15-county area.