‘You don’t think you’re going to get older, but you do’ 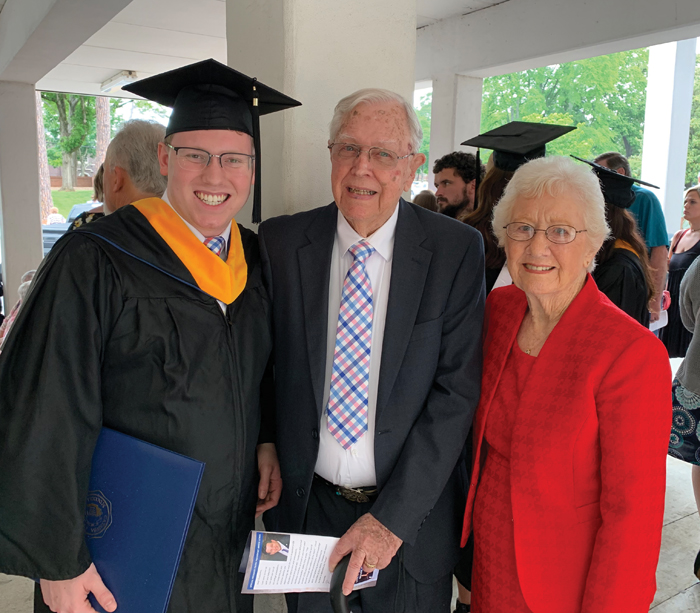 Ed and Cora Shinn with their grandson, Andrew Poe, at his Catawba College graduation in May 2019. At 92 and 88, respectively, they’re beginning to explore what life may look like in a retirement community. For now, they have decided to stay in their own home — called aging in place — with help.

Weighing the merits of aging in place vs. a community

In the summer of 1966, my parents brought their newborn daughter (me) home to a sweet little brick ranch Daddy had built next to my grandparents’ farm near China Grove. They loved it there, always raising a big garden and taking care of a big yard.

They eventually moved to a townhouse in Salisbury in 2002, which they have also loved.

In all the years of their 55-year marriage, they’ve never once mentioned moving to a retirement community — until my most recent visit earlier this month.

“You don’t think you’re going to get older, but you do,” says Momma, who turns 89 this year. Daddy will be 93. “You don’t think life is going to change that much, but it does. We’ve always been so independent and it just makes it tough to realize that we’re going to be dependent.”

So we started researching what options were available in Rowan County, which is where they’ve lived nearly all their married life.

Trinity Oaks Retirement Community is a continuing care retirement community, which means it has a buy-in component, plus a monthly fee for all amenities. Oak Park Retirement has apartments which rent on a monthly basis, with a wide complement of amenities which include meals.

“Most people know when it’s time to move,” says Gail Fisher, a resident of Oak Park. “And this allows them the opportunity to make their own decision so their kids don’t have to make that decision for them.” 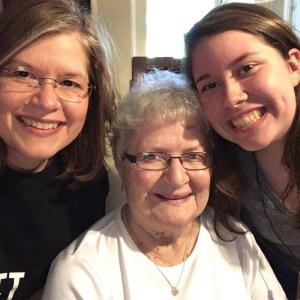 Gail and her late husband, David, visited several communities between Salisbury and Concord, says her daughter, Jamie Gobble. “From our perspective, it has been a blessing. It allowed us to clean out their house and sell it. It was an incredible task, but I’m thankful I was able to do that while she’s alive.”

She adds, “Every time we leave Oak Park, we leave thinking what a blessing it is that she’s there. The opportunities are there, and it doesn’t feel like a nursing home. While it’s independent living, there’s assistance to allow her to live independently.”

Her mom adds, “Talk to plenty of people wherever you decide to go to get their first-hand opinions.”

Doing your homework is crucial to this entire process, according to Bill Johnson, director of senior services at Trinity Oaks.

He tells families it depends on what they’re looking for and what their needs are. What they can afford is a key part of the picture as well, he notes. 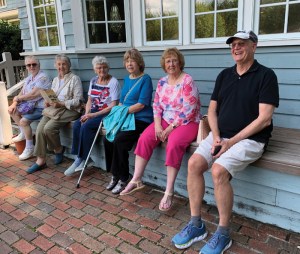 Bill Johnson, far right, is director of senior services at Trinity Oaks Retirement Community. He urges people to make a list of what they want in a retirement community.

“Write down what you hope to achieve,” Bill says. “Look at it from a cost standpoint, and look at places that fit your criteria. Look at multiple places if you can.”

It’s a lot like visiting a college campus, he says. You want to know how it feels for you. And if you’re used to a high-end lifestyle, you’ll probably want that in your retirement community as well. Check out what amenities and activities are available.

“Who you were in your earlier life is how you need to be in your retirement,” he says.

Foster and Jean Owen moved to Carol Woods in Chapel Hill 11 years ago, when they were in their early 70s. Friends said they were going too early, but they disagreed.

“You choose what makes sense to whom you really are,” Jean says now. “You have to do some honest soul-searching.”

The admissions counselor urged them, “Don’t wait until you’re too old to make friends.” 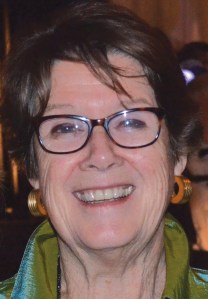 Jean Owen says, ‘You choose what makes sense to whom you really are.’

Jean had already done that six years ago when Foster died.

“That support system made a huge difference,” she says. “It was providential.”

Dear friends of mine live in a Trinity Oaks cottage. He’s lived there since about 2007, and she’s been there since they married in 2011.

His first wife became disoriented and began exhibiting odd behaviors, eventually breaking her arm and ending up at Trinity Oaks Health & Rehab, where she later died.

“Trinity Oaks literally saved us,” says the retired physician. “I cannot say anything but praise for Trinity Oaks.”

He and his second wife moved to a new cottage, adding a back porch.

“At first, we thought about living here or out in the community,” she says, “but it seemed to be more appropriate to be here. We love the cottage we moved in to, and it has freed us up to travel and not have to worry about maintenance.”

“There is such a diversity of interests here,” her husband adds. “You just don’t have dull living at all.”

Sometimes, couples move to be near their children. In Cindy Fink’s case, it was the opposite. Cindy moved home to Rowan County three years ago and became executive director of Meals on Wheels. While she was looking for a house, she moved in with her dad, Ken, who will be 89 in February.

It was, and Cindy later purchased the house from her dad.

“He doesn’t need my help,” Cindy says. Her dad delivers Meals on Wheels on Tuesdays and helps a friend with grocery shopping. He takes care of Pickles, her dog, while she’s at work. Some might argue that Pickles has become Ken’s dog.

Cindy says several of her friends have moved in with aging parents.

“When you think about it, it does have a lot to do with finances,” she says, “but you have to be in a community that supports aging in place.”

Aging in place means to stay in your own home, with help, if needed.

Franco and Brenda Goodman of Salisbury are one of those couples. 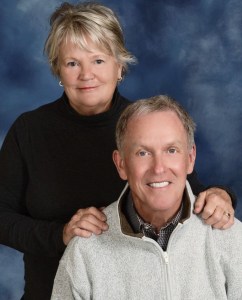 Brenda and Franco Goodman of Salisbury plan to stay in their home as long as they can. ‘It’s large but we use it,’ says Brenda, who loves gardening and yard work.

“Absolutely not!” she says, when asked about moving to a retirement community. “But to each their own. We love our home, and although it’s large, we use it.”

Brenda also loves gardening and yardwork, although not so much in the hot summer, sometimes, she admits.

Franco still works full-time as owner of Goodman Millwork, and is recovering beautifully from recent knee surgery, his wife says. She keeps busy with a variety of activities, including swimming 5-6 miles a week. They’re both in their early 70s.

“Our mantra is use it or lose it,” Brenda says. “We weren’t raised as weenies.”

Sandra Rogers wants to stay in her China Grove home as long as possible. She’s lived there for 45 years.

Her son Geoff, lives in New Jersey, and she stays in a condo that she purchased when she visits him and her four grandchildren. 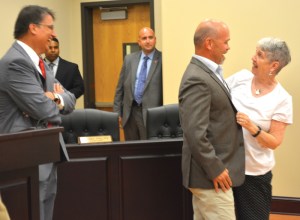 Sandra Rogers was surprised by her son, Geoff, who lives in New Jersey, when she received the Order of the Long Leaf Pine by Gov. Pat McCrory at China Grove Town Hall in 2016. Sandra wants to stay in her China Grove home, where she has lived for 45 years, as long as she can.

“I have a feeling that at some point, I’ll have to move to New Jersey,” she says. “I will go and I will make the best of it.”

She’s told her son that if she has to go to a nursing facility, she does not want a roommate.

But, she adds, “Whatever comes my way, I’m going to try to be gracious.”

For now, my parents have also decided to age in place, hiring someone to help with housecleaning. I’m doing other errands for them when I’m in town. (I’m trying to ease her into the idea of sending me a grocery list so that I can use an online service to have them delivered to her.)

“That’s our decision today,” she says. “Tomorrow might be different. We really should have started planning for this earlier, but we have enjoyed our life, and we’ve been lucky.”