My Turn, Olen Bruner: Some work done, more to accomplish one year after resolution’s passage 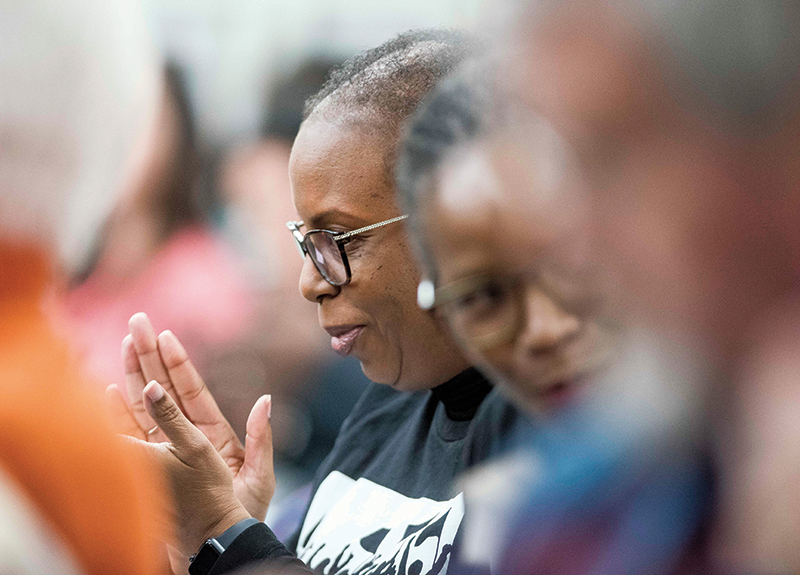 JON C. LAKEY / SALISBURY POST Dr. Regina Dancy was the first to take the podium during public comment at the Jan. 15, 2019 city council meeting in which the Salisbury City Council passed a Resolution of Reconciliation that condemned lynchings in 1906, violence against African-Americans and systemic racism. Salisbury, North Carolina 1/15/19

Just one year ago, Salisbury’s City Council unanimously passed a Resolution of Reconciliation, written at its request by Actions in Faith and  Justice.

The Resolution provided by the grassroots group offered Salisbury more than recognition of tragic murders and the unjust lynchings that followed. It also recognized present-day suppression of political power, education and economic advancement of the black community. These inequities exist in Salisbury, as they do throughout the nation. Yet, the adoption of the Resolution of Reconciliation was an important moment in the history of Salisbury because it brought forward a challenge and an opportunity to address these long standing inequities.

I want to thank all of those who came forward to speak on behalf of Salisbury’s Resolution of Reconciliation on January 15, 2019. For nearly 90 minutes, individual citizens stepped up to address past injustices and present-day inequities, helping our elected officials reach a unanimous decision. Again, the resolution offered citizens of Salisbury a number of challenges we are more than ready to take on.  Over the past year, I’ve seen workshops taking place throughout the city that grapple with social issues. Racial Equity Rowan was formed and has invited civic leaders, educators, law-enforcement, community employers, court system and religious leaders to engage race equity issues. The Action in Faith and Justice initiative is underway to establish a North Carolina School Justice Partnership in Rowan County. The partnership’s goal is to keep all students, regardless of race or economic means, in school and out of the court system.

I’ve witnessed various community groups inviting people of all races and economic means into the dialogue, moving beyond blaming and complaining, to better understand and rectify social inequities.

During the previous year, Actions in Faith and Justice along with many others, have answered the call to challenge inequity, injustice and racism. Many grassroots groups are continuing their necessary and important work, including the Salisbury Circle of the Poor People’s Campaign, Women for Community Justice, Community Fusion Coalition, Operation Clean Slate and Rowan Concerned Citizens.

I’m proud to be a citizen of Salisbury, a small southern city where there are so many people who are challenging themselves and others to investigate and change systems of oppression. I am inviting each of us to either begin or continue to stand up and speak out for justice. Your voice is not only needed in Washington, D.C., and throughout the state but also around the kitchen table, right here in this community. Your voice will be heard.

The questions on the table remain: ”How can we implement policies and practices that support living more justly with one another? How do we act to eliminate inequity and wrongful disparity?”

Actions in Faith and Justice, working closely with the Equal Justice Initiative, is placing a historical marker to recognize past injustices and to open dialogue and take action to eliminate current inequities. This project, along with the Resolution of Reconciliation and calling for a Rowan County School Justice partnership, represent our intention to collaborate with the wider community to catalyze justice and eliminate inequity.

Salisbury City Council’s Resolution of Reconciliation declares: Citizens of Salisbury need no longer be defined solely by our past, but now also by our newly established and ongoing actions. I invite people to connect with Actions in Faith and Justice and other grassroots social justice groups and become so resolved.

Bruner is pastor of Trinity Presbyterian Church and Actions in Faith and Justice co-chair.