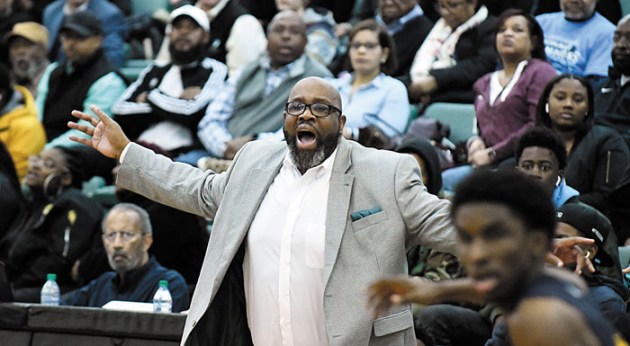 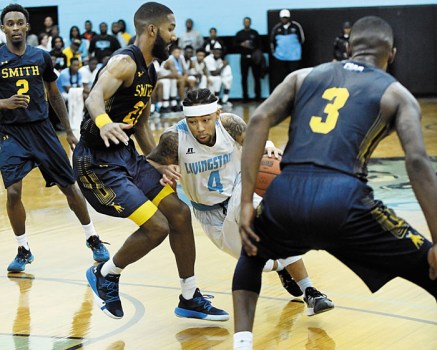 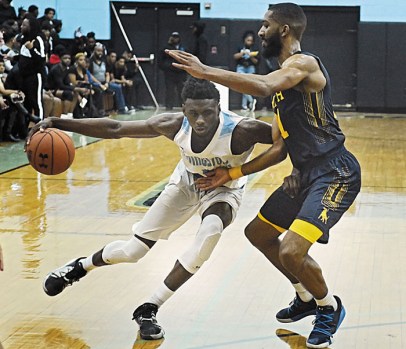 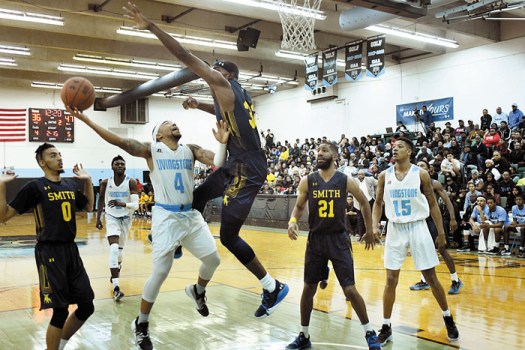 SALISBURY — Leave it to rival J.C. Smith to crash the party at New Trent Gym.

With a rambunctious Saturday afternoon crowd on hand, the visiting Bulls handed Livingstone’s men’s basketball team its first home loss — and foiled revered coach James Stinson’s first attempt to secure his 500th career victory. Not that it mattered to him.

“All this stuff about milestones doesn’t mean a thing to me,” Stinson made it known, moments after the Blue Bears suffered a 77-72 CIAA loss. “That’s not what I coach for. I’ve been telling people this the whole time and everyone wants to make a big deal out of it. It’s not that big a deal to me. What’s most important is we just gave away a Southern Division game. That puts us in a hole.”

The Blue Bears (10-8, 5-4) were clearly dejected after their modest, two-game winning streak was curbed. They shot a subpar 37 percent from the field (20-for-54) and made only seven field goals in the decisive first half, when Smith jumped to 32-18 lead and didn’t allow a Livingstone basket for eight minutes and 40 seconds.

“It wasn’t a pretty game, but we played smart,” said winning coach Steve Joyner, Sr. “That allowed us to be offensively and defensively effective.”

JCSU (11-5, 5-3) overcame a shaky start and finished 25-for-55 from the field. Livingstone owned the opening four minutes — when 6-foot-9 junior Lydell Elmore dunked twice and his twin, Navar Elmore, slammed it once — providing a 9-5 lead and turning the cheering section into a human trampoline. Then, as if somebody turned off the spigot, a long scoring drought ensued and the Bulls carved out a 17-10 advantage with 7:30 remaining in the half.

“What happened,” said senior guard Roger Ray, “is we went away from what we were doing.”

More specifically, they went cold. Ray was 0-for-6 from the field in the first half before finishing 6-for-21. He nonetheless poured in a game-high 30 points, swished a couple of 3-balls in the waning moments and was a perfect 16-for-16 from the free throw line.

“We knew Ray was gonna be Ray,” said Joyner, now in his 33rd season. “We made a concentrated effort to defend his shot and make it tough on him. He still got penetration and made lots of free throws. If he was getting big numbers from the field, that would have been a double-whammy.”

Stinson blamed a lack of execution on LC’s part. “We weren’t able to get the ball where it needed to be,” he said. “We had people taking uncharacteristic shots that weren’t available. There’s no excuse. We didn’t execute. And people coming off the bench didn’t execute. Roger was off, but everybody else has to open up to the basketball to be able to receive it. We were standing and watching.”

Despite all that, the Blue Bears were still in the game late in the second half. Two Navar Elmore free throws drew them within 57-53 with 7:07 to play, but the rally stalled when Smith responded with an 8-1 run. Only 1:48 remained when Livingstone’s Cam Carpenter made a steal near midcourt, drove the right side and scored on a major-league slam, trimming the deficit to seven points. But again, the guests answered, this time when senior guard Cayce Minor threaded a short jumper from the right side, making it 73-64.

“That was big,” Joyner said. “They were making their run and the clock was ticking and (Minor) connects. He was an important factor late in the game.”

When it ended moments later, Stinson was stuck on 499 wins and LC was 3-2 against Southern Division foes.

NOTES: Livingstone spent most of the game swimming against the current. It led for only six minutes and 27 seconds. … Ray added four assists and two steals, but was an unsettled 2-for-10 from long range. He’s totaled 100 points in Livingstone’s last three games. … Carpenter finished with 12 points and hit a pair of 3-balls. Lydell Elmore contributed 11 points and nine rebounds. … Joyner said he is approaching 600 career coaching wins. He admires Stinson and counts him as a friend. “He’s a good student of the game, someone who always tries to make his team better,” Joyner said. “His staple is that he gets the most out of his team every year.” … The Blue Bears, now 5-1 at home, host St. Augustine’s on Wednesday night at 7:30, following the women’s game.