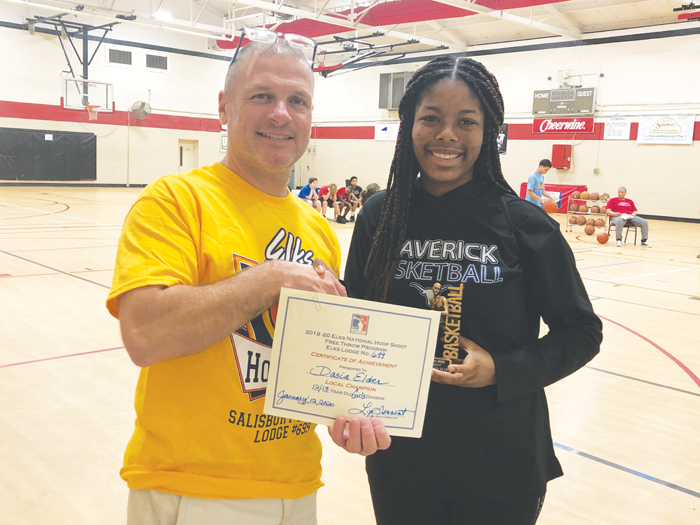 Elder will lead a new group of local winners to the Elks District competition in Winston-Salem on Jan. 25.

Elder, a 7th-grade student at North Rowan Middle School, is no stranger to basketball nor to the Hoop Shoot contest. She is a four-time winner on the local level. In 2017 and 2018, she won the girls 10-11 age group. Last year, Elder claimed the top spot for girls (12-13), won the district contest, but came up short in the state contest.

This year, Elder hopes to advance past the district and state to compete in the regionals in Maryland.

“I love playing basketball,” says Elder. “I started playing when I was about eight years old at Hall Gym with the Salisbury Parks and Rec leagues. I’m thankful to my mom and dad (Aronda and Billy Elder) for encouraging me to play, since I was not really that interested in sports.”

The Elders’ support has kept Dasia on the courts. She plays center for the North Middle varsity team, which won the conference championship last fall. She also  plays for the AAU Team FLY, an area travel team, and participates in weekly clinics with Coach Antwaun Thompson from JLT Fieldhouse, Inc.

Along with her parents and Thompson, Elder said that she gains inspiration from
Candace Parker, who was the 2008 first-round draft pick with the WNBA and still plays professional basketball with the Los Angeles Sparks.

Elder hopes that a basketball scholarship to UCLA might be part of her future. But, for now, her goal is to use her skills and experience at the free-throw line.
“I like Dasia’s chances to advance in 2020,” said Archie Blythe, Salisbury Elks Lodge (#699) Exalted Ruler and Hoop Shoot referee. “She has great talent, focus and determination. It also helps that she has been to district and state levels before, so that should help to calm the nerves and pressure.”

Even though it will be the first district contest for other local winners, both Blythe and Elder agree they’ll be strong competitors. Ryan McCoy shot 72 percent from the line, Davis sank 68 percent; and Spence drilled 73 percent, edging out Cross by one basket in a shoot-out for boys 12-13 division title.

So, what advice does Elder have for these local boys and girls at district?

“Wear comfortable clothes and shoes,” she shared, with a smile. “It’s a long day.”
Elder added: “Don’t worry about missing shots. That will only get you distracted, down and you’ll keep missing. Stay focused on making shots. Remember to keep your form. Stay positive and have fun.”

That’s great advice from a 13-year old, whether you’re playing basketball or not.

Liz Tennent, Hoop Shoot event coordinator since Elder’s first title in 2017, has watched her improve and grow as a player and young person.

“Dasia is an amazing young lady,” said Tennent. “She works hard and always wants to get better. There’s no doubt she wants to win, but she’s a team player who encourages other players to do their best. She’s a great inspiration and role model, on and off the court.”

Tennent was pleased with the turnout and results, especially with all the new
participants from across Rowan County. McCoy, Davis and Aron are all students at Salisbury Academy. Spence attends Knox Middle School and Lawson attends West Rowan Middle.

Over 20 contestants represented a total of 12 schools from Rowan County,
including the Home School Association. Tennent wants to continue to increase the number of participants, particularly among girls.

“We are fortunate to have a lot of basketball leagues for boys and girls in Rowan
County,” says Tennent. “We promote our event through these leagues, the schools, local media, email and social media. I’m not sure why we don’t have more girls involved, but that’s an important goal for us.”

Tennent added: “We know they play and can shoot. We know the girls ‘got game,’ just like Dasia! We want them to come out and shoot some hoops in the future.”

For more info about the Hoop Shoot contest, contact Liz Tennent at
ectennent@gmail.com.