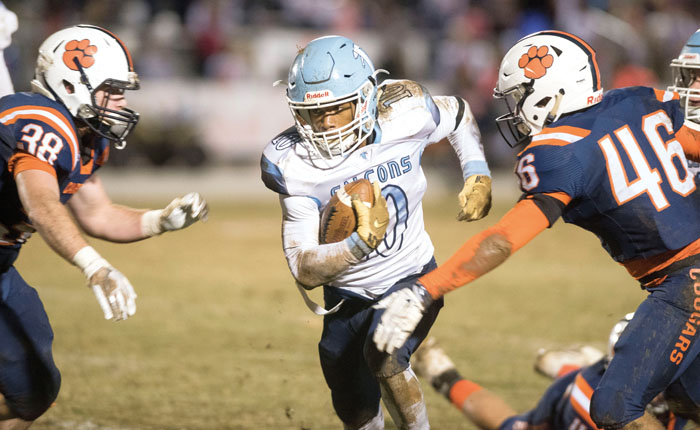 JON C. LAKEY FILE PHOTO/SALISBURY POST ... West Rowan’s Jalen Houston (10) runs with the football, during a game against Carson on Nov. 1. Houston is the Post’s co-Offensive Player of the Year.

SALISBURY —  It was in 2000, before West Rowan senior Jalen Houston was born, that something similar to his amazing 2019 football season occurred.

As it turned out, touching the ball on every snap, Miller became an even more impactful and dynamic player for the Cavaliers. He became a dual-threat legend before people even knew what a dual-threat QB was.

Because of his unusual career path, Miller always has held a unique place in the Rowan County record book — 13th in career receiving yards (1,809) and 15th in career passing yards (3,475). You look at those numbers, and you think there has to be typo somewhere. Was the guy throwing the ball to himself?

Future generations also will be puzzled by the career stats of Houston — who current ranks fourth in career receiving yards (2,581) and 43rd in career rushing yards (2,148).

Houston was on track to become the first 3,000-yard receiver in Rowan County history when he changed positions  as a senior. He did what his team needed him to do, and he did it with such verve that he is the Post’s Rowan County Co-Offensive Player of the Year, sharing the award with North Rowan senior back Malcolm Wilson. Houston also was in the running (no pun intended) for the award as a receiver/returner as a sophomore and junior, but didn’t win it.

West began this season as it begins every season — determined to win games by being the more physical team on the offensive and defensive lines. West had the perfect back for a smash-mouth, ball-control, clock-chewing offense in 215-pound tractor Michael Gonsalves. West also had Houston, the county’s finest receiver. It took two guys to cover him, so it was hard to stack the box against the run.

It was a sensible plan, but the schedule was tough. In Week 3, West shoved Cox Mill all over Mount Ulla and Gonsalves ran 27 times for 179 yards, but the Falcons beat themselves with five turnovers.

Week 4 against Davie, with A.L. Brown looming on deck, was a pivotal 50/50 game. West was going to come out of it 2-2 or 1-3, and there’s a world of difference between 2-2 and 1-3. Gonsalves had carried 26 times, three of them TDs, against the War Eagles when he was injured. In West’s first three games, Houston had rushed seven times for minus-1 yard, but West coach Joe Nixon shifted him to the backfield against Davie. He responded ith 15 carries for 108 yards in a 24-21 victory that meant a lot to West’s successful season.

“Mike got hurt, so we asked Jalen to carry more of the rushing load,” Nixon said. “It was easier to hand it to him than to throw it to him, but if we’d kept him at receiver, I have no doubt he would’ve had a big year catching the football. But by moving to running back, he made us a better team. We really started moving the football.”

In West’s final 10 games, the 160-pound Houston was a workhorse. He averaged 22 carries and 174.3 rushing yards per game. Sophomore Cayleb Brawley almost produced 1,000 yards himself, so West had a powerful running attack. And when you can run the ball, it opens things up in the passing game. Sophomore QB Noah Loeblein threw for 1,164 yards.

Houston gradually learned patience. He learned to let guys make their blocks before he exploded.

Houston would score 22 TDs as a senior, four through the air and 18 on the ground. He finished his epic career with 54 touchdowns

“Actually, I loved being a running back,” Houston said.  That’s who I was when I was growing up. You want to try to help your team win. I got a lot more chances to do that as a running back.”

In the East Rowan game on Oct. 11, Houston and Brawley both topped 200 rushing yards, a feat that Rowan teammates had never previously accomplished.

Houston saved his best for the end, for West’s toughest games.

In the final game of the regular season, the  Falcons battled Statesville for the North Piedmont Conference championship. Houston was fantastic in a 27-24 overtime loss. He carried 29 times for 166 yards and a touchdown.

“We knew as a running back that Jalen would give us some big plays,” Nixon said. “But no one knew he’d be able to run the ball between the tackles they way he did. That surprised everyone. He ran with power. He’s 160, but he runs it about as hard as 160 can run it.”

In the playoffs, West relied more heavily on Houston than ever. He had 195 rushing yards and three TDs to lead a 42-32 first-round win at Freedom. With West down 12-0 early, Houston’s 73-yard scoring run turned the tide.

The second-round game at Crest, the No. 1 seed in the 3A bracket, was the stage for Houston’s finest performance. With Brawley hurt, Houston carried 35 times for 278 yards in a 35-30 victory. Given the quality of the opponent, that was one of the outstanding performances by a back, not just in 2019, but in county history.

“No clue how it all happened,” Houston said with a laugh. “All I know is I ran it a lot and I ran it hard. Crest was a good team, but we ran it better than we ever have.”

“We ran the ball so well that we stayed in good (down-and-distance) situations on offense all night,” Nixon said.

Houston combined heart and determination with his great acceleration. The reigning county track and field champ in the 100, the 110 hurdles and the 300 hurdles, no one can hit a hole quite like he does.

“Houston is fast, he’s quick, he’s elusive, and he’s tough,” Statesville coach Randall Gusler said. “He’s got different gears. You think you’ve got him hemmed in, but then he’s out of there. He’s a handful.”

Houston took a pounding as a running back. There were a lot of sore Saturdays. But he also dished out punishment. He was proud that the took the licking and kept right on rolling.

“It was all fun,” Houston said. “When you make the third round, when you’re part of a close team, football is a lot of fun.”