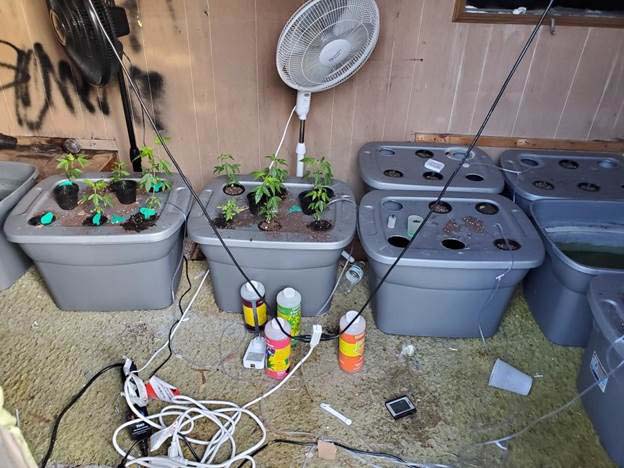 The Rowan County Sheriff's Office discovered a marijuana grow operation at a China Grove residence where a teen was living alone after a parent was arrested. Submitted photo

CHINA GROVE — A China Grove teen with possible gang ties was charged Thursday after detectives uncovered a marijuana growing operation at a residence.

Detectives were alerted that the teen may have been living at the residence alone after a parent had been arrested, according to a statement from the Rowan Sheriff’s Office.

On Thursday, Rowan County Sheriff’s Criminal Investigative Division detectives responded with the Rowan County Department of Social Services to conduct a welfare check in the 600 block of Pine Ridge Road in China Grove. Rowan County Social Services was told a 16-year-old juvenile, already on probation, was living at the home alone for a week after the parent had been arrested, according to the sheriff’s office.

The juvenile reportedly had frequent visitors at the residence, according to the sheriff’s office. When Rowan County Social Services and a detective arrived, the officer said he saw evidence of drug use and secured the residence.

The detective returned with a search warrant and additional investigators. During the search, detectives discovered 21 marijuana plants growing inside a camper, along with 84 grams of marijuana individually packaged and 44 grams of methamphetamine inside the residence. Detectives seized three handguns, two rifles, a tactical shotgun and an assault rifle.

The Rowan County Sheriff’s Office said the juvenile suspect had possible Latin street gang ties. The suspect was taken into custody and charged as a juvenile.