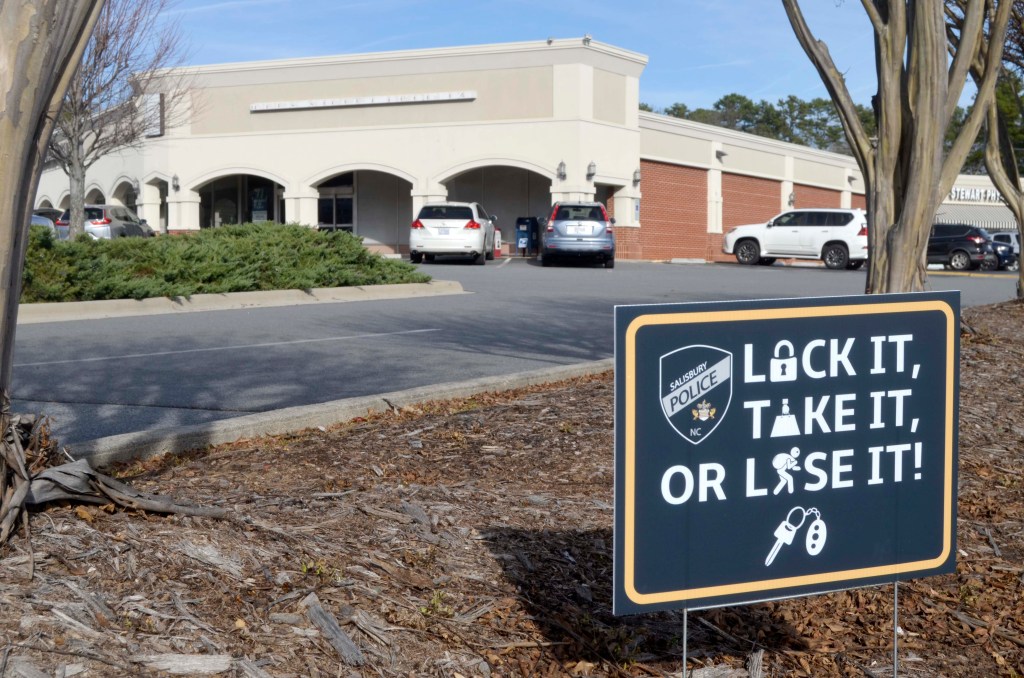 Salisbury Police are investigating a number of vehicle break-ins at local hotels. The agency has posted a number of signs like this one located in the Ketner Center and throughut the city reminding people to lock their vehicle doors, take their items with them or face possibly losing it to thieves. Shavonne Walker/Salisbury Post

SALISBURY — In one night, six trucks and two passenger cars were broken into at a local hotel, say Salisbury police.

The eight local vehicles were located at the Courtyard by Marriott, 120 Marriott Circle, but Salisbury Police Capt. Melonie Thompson said there are more hotels and businesses in the city whose guests or patrons have been victimized.

In the Jan. 14 vehicle break-ins at the Marriott, Thompson said windows were busted and the thief took valuable items that were left inside.

Her advice: “Don’t leave items of value in open view. Hide everything.”

The hotels and businesses located along the interstate, said Police Lt. Greg Beam, are typically targeted because of their proximity to a major transportation corridor. In Nov. 2018, Salisbury Police implemented an initiative called Santa Patrol, where they beefed up patrol at shopping centers around the holidays. Officers have continued increased patrols at hotels and shopping centers, Beam said this week.

Thieves look for unlocked vehicles and anything can be considered “valuable” to a thief, including a cellphone charger, Thompson said.

Thieves are walking away with GPS devices, iPads, laptops, firearms, wallets, purses and cellphones, she said.

She advised anyone parking a vehicle in a public place or even their driveway to lock the car and also take items out of plain sight or hide them somewhere inside the vehicle. The catchphrase that police want motorists to remember is “lock it, take it or lose it.”

They’ve added this phrase to signs that have been placed at area businesses.

Police Chief Jerry Stokes has previously encouraged residents to use Leads Online, a tool designed to store serial numbers for valuables. He recommends taking pictures or videos of valuables that can be stored in the cloud.

Locals can visit reportit.leadsonline.com to securely store serial numbers, item descriptions, pictures and scans of receipts so that in the event of a theft or loss, the items can more easily be identified.

Anyone who sees suspicious activity, people or vehicles in a hotel, shopping center or other areas can contact the Salisbury Police Department anonymously at 911 for emergencies or via the non-emergency number, 704-638-5333.