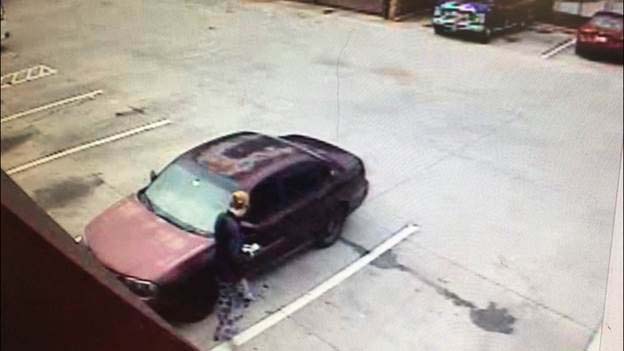 Rowan County Sheriff's Office detectives are looking for a man possibly connected to a couple of armed convenience store robberies. The man was captured on video leaving in this burgundy Chevrolet Impala. Submited photo

Jail records show Shelby Earl Smith, 23, was charged Friday with robbery with firearms or other dangerous weapons and placed under a $150,000 secure bond.

ENOCHVILLE — The Rowan County Sheriff’s Office Criminal Investigative Division is asking for the public’s help to identify a man who may be connected to armed robberies at two convenience stores.

The most recent robbery occurred 3:20 a.m. Wednesday at a 7-Eleven store at 2720 West C St. in Enochville. A store clerk told investigators she was putting doughnuts on racks inside the store when a white male wearing a black hooded sweatshirt walked into the store. The man was wearing a red ski mask and blue jeans. Afterward, he told her to lie face down on the floor and not to get up until he was gone.

The first robbery occurred Jan. 7 before midnight at a Rushco store at 2023 West C St. in Enochville. In that incident, the clerk said a man came into the store, pointed a handgun at her and ordered her behind the counter. Surveillance video showed a man wearing a navy blue hooded sweatshirt, blue jeans, black sandals, a dark-colored ski mask with red color around the mouth area and white paint on it. He wore latex gloves.

The man told her to open the register and give him the money inside it. He reportedly searched under the cash drawers for more money and took a pack of cigarettes before he ordered her on the ground, the Sheriff’s Office said. He then ran out of the store.

Sifford said similar armed robberies have occurred in the same area at other businesses and those may be related.

Rowan County Sheriff’s Office detectives also have located security video footage from a Salisbury business that may be related to the Enochville robberies. The suspect is seen inside the store as well as leaving in a burgundy Chevy Impala.