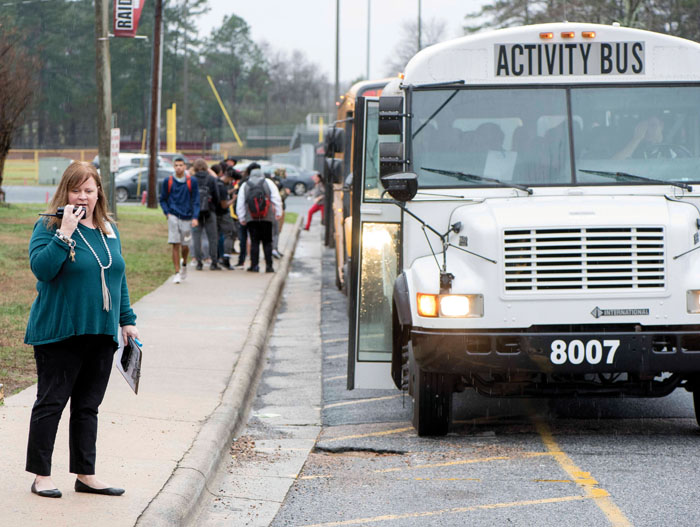 JON C. LAKEY/SALISBURY POST South Rowan Principal Kelly Withers makes sure that all off the students and staff were accounted for before departing to the off site location.

“It’s probably a little bit slower than we would want it to be, but for the first time, you’re moving almost 1,000 people from one site to another, it went pretty well.”

— Kelly Withers, principal of South Rowan High School, who was talking about a drill
conducted Tuesday to simulate transporting students in an emergency

“For us, it’s more about building experiences, building connections, just giving them things to think about.”

— Jennifer Lentz, principal of Southeast Middle School who spoke to the Post this week about the school’s plans for “renewal”

“I told Debbie all along that I really wanted her to have it because there is just a connection. It’s a local connection.”

— Cathie Dietz, who formerly owned K-Dee’s Jewelers on Innes Street and sold her building to the owners of Barnhardt Jewelers

“I broke down. I was so scared I didn’t know what to do. I was just covering the baby.”

— Mandy Newton, whose house in Rockwell was heavily damaged after storms on Saturday downed a tree and crushed the home’s roof

“To me, the biggest thing is we have two Democrats running instead of none, so you have a choice. Isn’t this what it’s about, having choices?”

“We are for the lawful use of
firearms and do not in any way
defend unlawful use.”

— Greg Edds, chairman of the Rowan County commissioners speaking after voting for a
Second Amendment resolution

“You feel tremendous pressure to find the guilty and bring them to justice.”