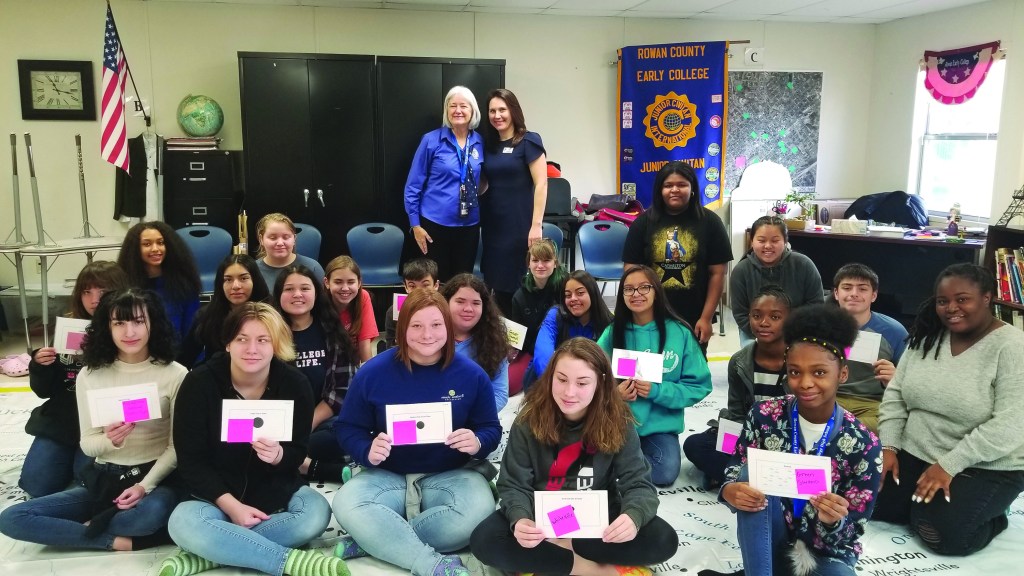 N.C. Teacher of the Year Mariah Morris visited Rowan-Salisbury Schools Teacher of the Year Theresa Pierce and her class. She drove to a meeting with Gov. Roy Cooper in Raleigh immediately after she finished a talk for some of the students at the early college.

Morris spends her days traveling the state, meeting teachers and going to schools. She lost count of how many she has visited since she began her tour last year, but she is not exhausted by the constant traveling either.

Pierce, a history teacher and two-time Rowan-Salisbury Schools teacher of the year, said she connected with Morris via social media and asked her to come visit her class.

Morris said the kinesthetic learning — where students carry out physical activities rather than listening to a lecture — using the map was an opportunity to bring learning to life for students and an example of how Pierce takes learning off of the page. The lesson included map skills, research, artistic representations and having the students teach the teachers. Morris said she would bring those ideas back to her own classroom.

Pierce invited Morris to the school and said there is no doubt in her mind why she is the state’s teacher of the year.

“She’s amazing,” Pierce said. “Her enthusiasm and hearing her stories when she was in the classroom, every time we were doing something with the map she had a connection. You could just tell that the kids just immediately connected with her.”

Caleb Shell, a ninth-grader and one of Pierce’s students, said Morris was engaging with students.

“She was saying how there are skills other than mathematics, reading and English and stuff like that, but also communication and empathy,” Shell said.

Shell does not know exactly what he wants to do when he gets out of school, but he is interested in engineering.