NC State speaker predicts 2020 will be year of economic growth 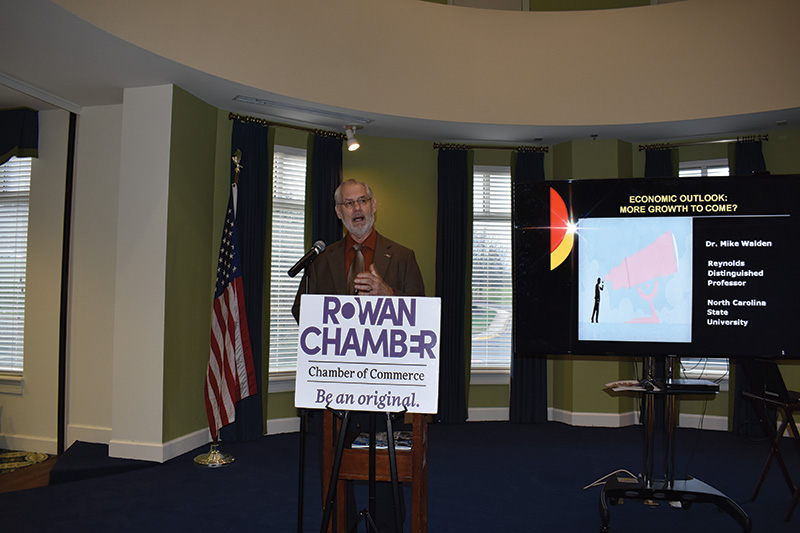 SALISBURY — N.C. State Professor and Economist Michael Walden gave his perspective on the economy and a look ahead ash the Rowan Chamber’s Power in Partnership on Thursday morning.

He gave the caveat that, because tomorrow may change the economy, his perspective is time-limited. But Walden said he believes that the nation’s longest sustained economic growth in its history will continue.

“2020 will be a growth year,” Walden said. “I don’t see recession in the future. I’ve been saying that all along, but more economist are now saying that.”

Growth, which looks at gross domestic product, has slowed to 2% in 2019 while it was 3.2% around World War II and before 2000. The question for economists is why is the country is growing more slowly. President Donald Trump’s administration, Walden said, argued one of the reasons was a need for more incentives. After Tax Reform Act of 2017 passed, there was a bump in economic growth in 2018, 2.95%, Walden said. It has since settled down to 2%.

Because fertility rates are low, Walden said, the country isn’t generating more people, particularly workers at rates they were previously.

Still, unemployment rates are down — at 3.5% nationwide, a 50 year low. In Rowan County, the unemployment rate was 3.8% mid-2019, he said. It’s not likely, he said, that there will be much of a further reduction in that rate since there are always going to be people in between jobs or taking a break.

Labor force participation — the number of people between 18 and 60 who are not disabled, incarcerated or in the military and employed or actively looking — has been impacted due to the opioid epidemic.

“We have a relatively new problem in our country and that is addiction due to things like opioids, and a great big problem here in North Carolina,” Walden said. “It’s estimated nationally there are 2.5 million people who addicted to opioids who if they weren’t addicted they would be working.”

Walden spoke about trade and the impact of well-known deals with China and NAFTA, the North American Free Trade Agreement. Walden said when NAFTA was approved in 1994 and was controversial in North Carolina. Many thought it would mean manufacturing jobs in the textile and apparel industries would leave.

That happened, he said.

Walden said a newly approved trade deal, the United States–Mexico–Canada Agreement, may help with farming and agriculture in the state by removing some barriers of selling dairy products to Canada. It also will be good for the state growing its auto sector, he said. The “new NAFTA,” as Walden called it, raises the requirement of parts that go into vehicles assembled in North America from 60% to 70%. It also requires an increase in wages for Mexican workers.

A new trade agreement with China, he said, will address problems involving rules and regulations that make it hard for U.S. companies to sell in China and vice versa, with China heavily subsiding their companies.

In order for North Carolina’s economy to grow, especially in rural areas, the state should concentrate on agribusiness, international tourism and retirees, Walden said.