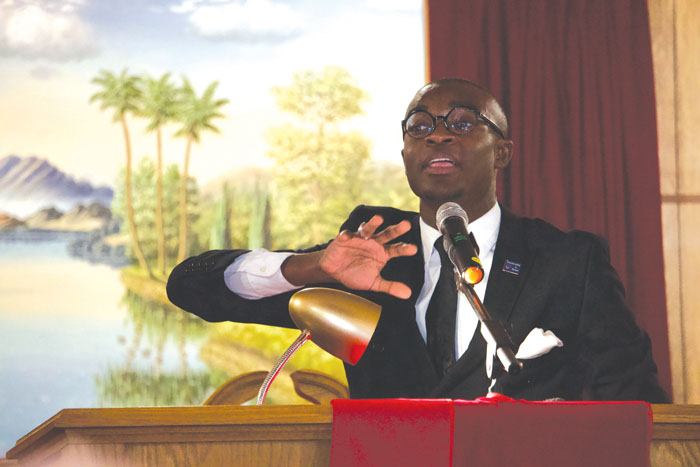 Carl Blankenship/Salisbury Post – Livingstone sophomore Justin Wade was the keynote speaker at the kickoff service. His sermon revolved around Psalm 146:7-9

SALISBURY – A pair of local NAACP chapters came together Thursday to hold a night of worship ahead of a weekend of activities celebrating civil rights icon Martin Luther King Jr.

This is the first year the Salisbury-Rowan and Livingstone College chapter of the NAACP came together to host this event. The night featured keynote speaker Justin Wade, a Livingstone sophomore religious studies major. It drew a small crowd to St. Luke Missionary Baptist Church, and Wade, originally from the Bronx, a borough of New York City, delivered a fiery sermon that revolved around Psalm 146:7-9. The Bible verses focus on God lifting up the oppressed and overturning oppressors.

“The thesis of tonight’s sermon is that there is vindication from the hand of God for those who have been politically and socially marginalized,” Wade said before the service. “I believe that message, especially given the current political climate which we see, will be very relevant to the nature of those who find themselves in positions where they’re disenfranchised, find themselves dealing with systematic and structural racism, poverty, how God’s hand is still at work even in those situations. Those situations, while they seem to last forever, are not permanent.”

Wade’s sermon was enthusiastically received by the crowd and St. Luke Pastor Rev. Marcus Fairley, who rose to his feet several times during the message.

Wade laid out a number of social justice issues — judicial unfairness in process and sentencing of black people as well as the killing of unarmed black men by police.

Savannah Bennet performed a pair of songs during the service 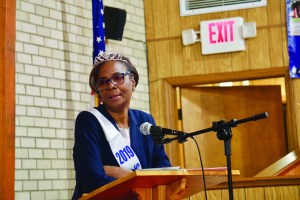 Carl Blankenship/Salisbury Post – Eva Knight-Wyzisk, the 2019 NAACP Woman/Mother of the Year. Knight-Wyzisk spoke to the crowd about several issues including preparing children for the future at a young age.

Eva Knight-Wyzisk, the 2019 NAACP Woman/Mother of the Year, spoke at the kickoff as well. Knight-Wyzisk touched on issues that included her outrage over the national 2019 college admissions scandal. She talked about the unfairness of being able to buy a child’s way into college when other parents sit, study and invest the time in their children to prepare them for college.

Knight-Wyzisk also commented on the importance of speaking to children about what they want to do with their lives and to begin those conversations early on. She told a story about how thrilled she was when her daughter got straight As in elementary school. Knight-Wyzisk wanted to take her daughter on a shopping spree and out for a nice dinner to celebrate.

Her daughter rejected the idea. All her daughter wanted was to go to McDonald’s and get a pair of happy meals — one to eat for lunch and one to eat later so her mother would not have to cook dinner that night. She also wanted her mother to get a pair for herself and do the same so she could get a full set of the toys that come with the meals.

In an interview before the service, Salisbury-Rowan NAACP President Gemale Black said the kickoff was a call to action, and that the association’s work is far from finished. Black specifically pointed to the NAACP’s fight against North Carolina’s voter identification laws.

The law was temporarily blocked in December after the N.C. NAACP sued over the issue. The NAACP has called out the law as a method of voter suppression and deterring minority voters.

Black said honoring King is great, but it needs to be done every day of the year. Black noted the song “We Shall Overcome,” which King recited words from during his final sermon, as something that will be referenced heavily over the weekend.

“It’s now time to get to that point and start saying ‘we have overcame,’” Black said.

Fairley is also the religious affairs chair for Salisbury-Rowan NAACP and works for the state office as well.

“We wanted to do something a little different this year to really highlight our youth and young adults in our Livingstone chapter,” Fairley said. “That’s why we incorporated with them and just wanted to bring a joint effort together to show some younger faces that are in the movement.”