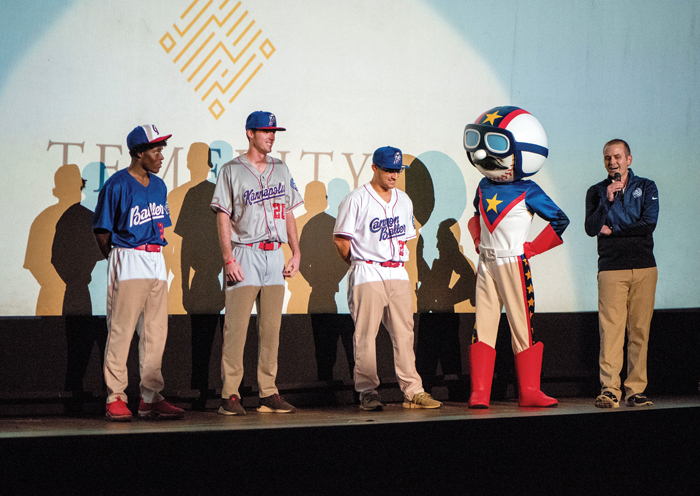 In October, a team that had been the Phillies, Boll Weevils and the Intimidators became the Cannon Ballers. With the team’s new stadium being built in the area where the massive textile mill once stood, Cannon Ballers was an obvious and fitting nod to the Cannon family’s crucial role in building the city of Kannapolis. It wasn’t quite as simple and easy as choosing the “cannons,” but it was still a sensible choice.

Now, the team has named its mascot — sculpted to look like the city’s native son, Dale Earnhardt Sr., ready to be shot out of a cannon — Boomer. The team framed the name around the idea that the mascot would hit balls “out of the park.”

It’s a name about which younger generations won’t have to think too long before arriving at the phrase “OK, Boomer.” For the uninitiated, “OK, Boomer” is a derogatory phrase used by Generation Z, those born after 1997, and Millennials, born between 1981 and 1996, as a retort against their elders.

“You should stop playing video games and come spend time with your family,” the older generation says.

It started out as a phrase made in jest, but has turned into more than that. It’s certainly seen by the Baby Boomer generation as an insult.

The team could have taken the easy route and chose Dale — in another nod to the NASCAR legend — or Charles — the longtime leader of Cannon Mills. Instead, Boomer was the choice after more than half of respondents selecting it and more than 60 submitted it before voting began. While it’s good that the team chose a name based on fan voting, it certainly had the ability to choose something else if it wanted.

That the Kannapolis baseball team has chosen to name its mascot “Boomer” won’t further an ongoing societal decline in generational relations or have any wide-ranging effects. After all, it’s just a mascot name.

But it’s going to prompt the same response from young folks who hear it for the first time — OK, Boomer — and likely teach kids a phrase that their elders have come to despise.

The team has completed its rebranding, with a new name and mascot. The name and look of the mascot are good, but the team could have done better in choosing a mascot name.