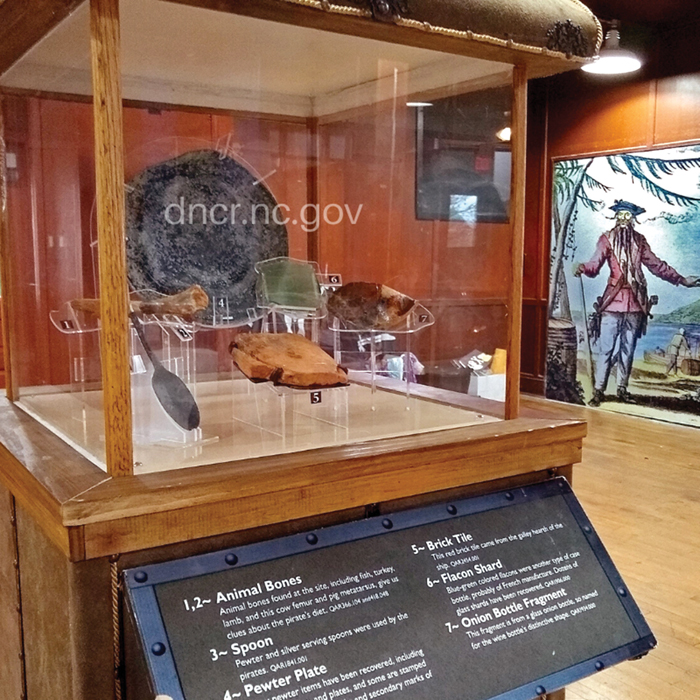 Dept. of Natural and Cultural Resources. The exhibit includes artifacts from daily life.

In 1718, the famed and feared pirate, Blackbeard, ran his flagship, the Queen Anne’s Revenge, aground near what is now known as Beaufort Inlet. Actual items from that ship, after spending nearly 300 years in the waters of the Outer Banks, will be displayed at the N.C. Transportation Museum today through March 29.
“Blackbeard’s Queen Anne’s Revenge” is a traveling educational exhibit created by the N.C. Department of Natural and Cultural Resources.
Blackbeard captured the French slave-ship, known as La Concorde, in September 1717. Renaming the vessel Queen Anne’s Revenge, Blackbeard terrorized the east coast, including a week-long blockade of the port of Charleston, eventually commanding a flotilla of four ships and 300 pirates. It was in June 1718, however, that the Queen Anne’s Revenge ran aground in Topsail Inlet. The ship was lost, but Blackbeard’s adventures continued until November, when the famed pirate was killed in an attack led by Royal Navy Lieutenant Robert Maynard.
In 1996, the Queen Anne’s Revenge was discovered at Topsail Inlet. The ship’s identity was confirmed, and ever since, items have been pulled from the depths, painstakingly documented, and preserved. A permanent exhibit is on display at the N.C. Maritime Museum in Beaufort. Through this traveling exhibit, Blackbeard’s legendary story is also being told at locations across the state.
Blackbeard’s Queen Anne’s Revenge features weaponry, nautical tools, and personal items from the ship. Iron spikes that held the vessel together, plates and spoons for shipboard dining, cannon balls featuring a Swedish maker’s mark, grenades, and lead shot are all part of the exhibit.
Touch screens tell the pirate’s story and provide information on the shipwreck’s recovery. Displays explore 18th century pirate life, while a gallows and gibbet show how many of these sailors paid for their piratical deeds.
“Blackbeard’s Queen Anne’s Revenge: 1718” also includes hands-on kid’s activities like pirate dress up, with available pirate garb and photo stations. Kids can make their own pirate flag. A rope tying station shows how to tie the knots used by pirates. Bell ringing activities also show how pirates regulated their day, announcing changes of the watch, mealtimes, prayers, and danger.
Admission to the museum is $6 for adults, $5 for seniors/military, and $4 for children 3-12. Two years of age and under are free. The museum is open 9 a.m. to 5 p.m. Tuesday through Saturday. Beginning in March, the museum will also be open Sunday from noon to 5 p.m. More information is available at www.nctrans.org