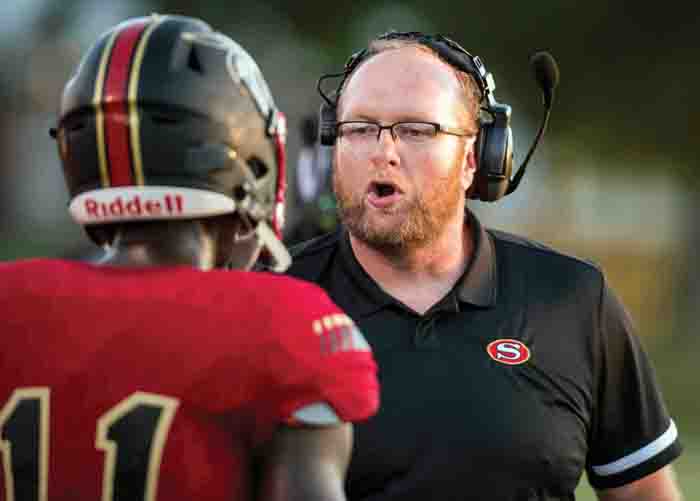 SALISBURY — “I’m not saying there are going to be any miracles, but Salisbury is a place where you can build a strong program. Our goal will be to get Salisbury back to being a force in the state in 2A.”

Those were the words of Brian Hinson when he was hired as the head football coach of the Salisbury Hornets in March, 2017.

Eight months later, Salisbury had a stronger program and owned its first winning season since 2012.

In 2019, Hinson delivered not only his third straight winning season, but threw in a few miracles. Salisbury (13-3) was state runner-up in 2AA and, by any measure people want to use, has returned to being a force.

Hinson is the Post’s Rowan County Coach of the Year for the third time. In 2009, in his final season as East Rowan’s head coach, he shared the honor with West Rowan’s Scott Young.  His second award came after getting the Hornets turned around in 2017.

Salisbury played a lot of young guys and went through growing pains in Hinson’s first two seasons, but managed records of 7-4 and 7-5. The Hornets were expected to be improved in 2019, although even Hinson didn’t see the magnitude of the jump that was coming.

“Going in, we thought we could be pretty good,” Hinson said. “But it’s not like I could foresee us playing in a state championship game.”

Salisbury’s defense was outstanding right from the start. The offense, which was minus quarterback Vance Honeycutt for two September games, wasn’t at the same level early, but it was slowly coming together.

Salisbury headed to a showdown against Oak Grove on Oct. 11 with a 6-0 record, but that was a night on which anything that could go wrong, did go wrong. Turnovers and special-teams mistakes snowballed into an ugly 35-19 loss.

“Oak Grove made some things happen, and it just wasn’t our best effort,” Hinson said.

Lots of people hopped off the Salisbury bandwagon after the Oak Grove debacle, but the next week’s game at Ledford proved to be one of the defining Fridays of the season. Salisbury hadn’t beaten Ledford more than a decade, but after clinging to a 3-0 lead at halftime, the Hornets took over in the second half, dominated, and won 30-6.

“That’s the night that, as a staff, we saw flashes of what this team could be,” Hinson said. “We played a really strong second half against a talented, well-coached team. We saw, as a staff, that we had an opportunity. We we were good, but we challenged our guys to be better than good. We challenged them to be great, and they bought in and made that commitment.”

There would be more adversity. On Nov. 1. Salisbury took a 21-10 lead to halftime at Central Carolina Conference opponent North Davidson, but lost, 24-21. That second loss in the 10-team CCC led to the Hornets finishing tied for second with Ledford and Thomasville, a game behind Oak Grove.

When the state playoffs arrived, the Hornets were 9-2.

They were the No. 7 seed in a 2AA East bracket filled with unfamiliar programs.. That meant just one home game and a lot of road miles, but Hinson also knew the Hornets had a chance to power through that bracket, just as North Davidson had in 2018.

After a routine home win against Mount Pleasant in the first round, the Hornets became road warriors. They embraced the quest.

“Those next two crazy weeks, when we went to Washington and then to Hertford County, we traveled 1,000 miles round trip,” Hinson said. “That was a challenge for us as a staff, but I think we were able to avoid getting caught up in all the stresses and headaches. We were able to sit back a little bit and  just enjoy the ride, and that was very important. Our kids were great. They believed. They made it fun. We had some experiences those two weeks, not just the games, but the bus rides, the restaurants, the practices, that none of us will ever forget.”

Meaningful victories for Hinson, who hadn’t won a playoff game in his first two seasons at Salisbury, and for a program that hadn’t seen the second round since 2012.

“Washington was a solid No. 2 seed in our region, and Hertford had tremendous talent, a lot of Saturday players,” Hinson said. “Those were great wins for our staff and for our kids. Not a lot of people thought we’d be in the situation of playing in games like that, but our kids proved that the moment was not too big for them.”

When Salisbury went to top-seeded Randleman for the regional final, a normal road trip, just 50 miles away, it was almost like a home game. The Hornets were confident. The defense didn’t allow much of anything to Randleman, and the Hornets won 14-7 to punch their ticket for the state championship game at Wake Forest.

“I think the reaction of our kids after that Randleman game — just seeing their faces, that was the high point of the season for me,” Hinson said. “When I came to Salisbury it was with the goal of creating memories like that and of helping our players have lifetime memories like that. Nights like Randleman are why I coach.”

The 34-0 loss to Shelby in the title game hurt for a few days, but it didn’t dampen anyone’s enthusiasm about the season.

“I took (senior linebacker) Jabril Norman on a recruiting trip, and we were talking to Shelby receiver JaHari Mitchell.,” Hinson said. “He asked about (9) and about (11) on our defense and wanted to know if they were coming back.”

Zae Clay is No. 9. The CCC Lineman of the Year, he’s a junior. No. 11  is sophomore linebacker Jalon Walker, a future D-I player.

“The potential is there for us to be really good again,” Hinson said. “We’ve got eight returning starters on offense and five or six on defense. But the key is for our guys not to get complacent. We have to remember the level of effort and commitment that it took to get us as far as we went this year, and we have to maintain that kind of effort. It all starts with our work in the off-season.”

Hinson has come a long way since his middle school days when he first started drawing up football plays.

He’s from Star, a small town in Montgomery County. He was class president at East Montgomery High and starred on the football team, but he also spent a lot of Saturday mornings after football Fridays working in a restaurant.

He came to Catawba College to play football for coach David Bennett. He was starting at tackle as a freshman and became an All-American. As a senior, he won the Jacobs Trophy that goes to the South Atlantic Conference’s top offensive lineman. He earned a P.E. degree and the Gordon Kirkland Award that goes to Catawba’s top male athlete.

Hinson’s coaching career began as an assistant coach at North Rowan. Next came grad assistant work on Bennett’s staff at Coastal Carolina where he earned a masters degree . Then he returned to Rowan County at East Rowan, where he served as offensive line coach, then offensive coordinator, and then head coach. His overall record in three seasons as head coach was 17-19. There was an humbling 1-10 year between two winning seasons, so he experienced plenty of adversity.

Hinson returned to the college ranks in 2010 and was the offensive line coach at Catawba for Chip Hester, and then Curtis Walker.

He stayed with the Indians until he applied for the vacant head job at Salisbury.

This season was proof of that.