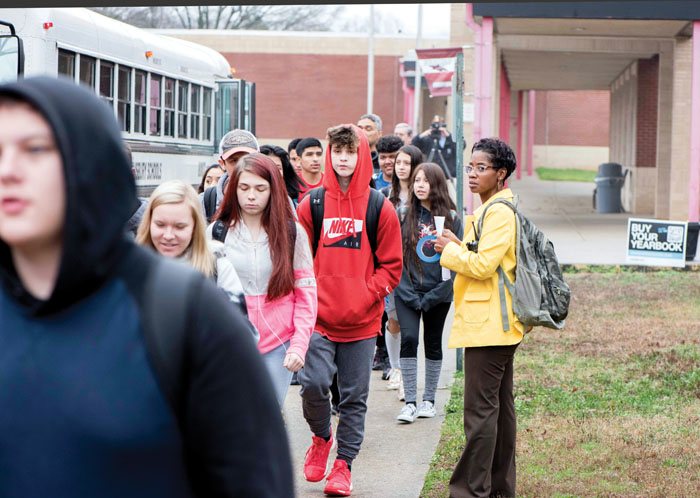 JON C. LAKEY/SALISBURY POST South Rowan high school's guidance counselor Tameka Brown (right) was given the job to be one of the staff members to make sure that the buses were filled and the teachers and students were accounted for. Brown was stationed at the front door of the school as the school was evacuated from 4 entrances into awaiting buses. Students at South Rowan High school took part in a surprise movement safety drill on Tuesday morning. The drill consisted of moving the entire student body and staff by buses to a prearranged off site location. Buses and drivers were called from other schools to proceed to South Rowan to pick up the students and then given the location to were to take them. The students today were taken to nearby First United Methodist Church. School officials hoped to learn from the drill ways to move large number of students more efficiently and safely in the case that a real emergency occurs. China Grove ,North Carolina,1/14/20.

CHINA GROVE – Fire, tornado and lockdown drills are a common part of how schools stay prepared for emergencies.

Less common, and something a pair of schools practiced this week, are situations where everyone in the school needs to be moved offsite.

Morgan Elementary School on Monday and South Rowan High School on Tuesday became the first in the district to perform student movement drills that move everyone off campus. South Rowan moved about 1,000 students off-site in about 44 minutes. Morgan moved less than half that amount of students off campus in 13 minutes.

Students and families were told about the drill, though they were not told the time the drill would be happening.

Rowan-Salisbury Schools Safety Officers Rick Towell said an active shooter on campus represents the most common emergency people think about and that drills are useful for being prepared to move students in different scenarios. There could be a gas leak, a power outage or a natural disaster like a tornado that could strike a school and cause damage requiring everyone to be moved. Alternatively, a suspicious package found on campus, Towell said. In an incident involving a suspicious package, the buses on-site would not be used.

“There’s a lot of reasons we may have to do that,” Towell said about the drills.

Moving an entire school unexpectedly is a logistical challenge. Everyone has to be accounted for, enough buses need to be on-site to move everyone at once, there needs to be a location where everyone can go.

Once the buses reach the site, they then need to be unloaded and taken inside the new facility. Some schools have to pool more buses than what are on-site to load everyone as well.

At the site, everyone has to be accounted for as well. In the future, Towell said he wants to have actors come in to demonstrate parents coming to sign students out from nearby sites

Morgan and South Rowan volunteered to be the first to perform the drills. RSS partnered with local emergency services as well as the locations in the community for the students to be taken.

South Rowan principal Kelly Withers said the school volunteered for the drill because it seemed like a good idea to be prepared.

“It’s probably a little bit slower than we would want it to be, but for the first time, you’re moving almost 1,000 people from one site to another, it went really well,” Withers said.

Withers said the students were cooperative and they seemed interested in the idea. The school will have a debriefing on the drill next week to discuss it and some things the school may want to change.

Towell said practicing keeps skills tight and gives staff eye-opening exposure to what it is like to move all students in a school.