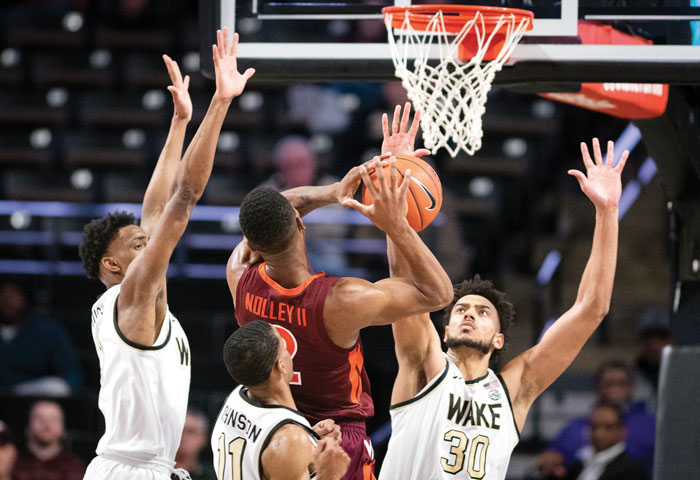 By J.D. BRASIER Associated Press
WINSTON-SALEM (AP) — Landers Nolley II and Tyrece Radford scored 21 points apiece for Virginia Tech on Tuesday night as the Hokies broke open a tight game early in the second half for an 80-70 road victory over Wake Forest.
Radford, a 6-1 redshirt freshman guard, punctuated an 18-6 run in the second half with a spectacular dunk that became a three-point play over Wake Forest 7-footer Olivier Sarr. Radford also grabbed a game-high 13 rebounds. Jalen Cone scored 15 for the Hokies.
The left-handed Radford soared to the basket and threw down a powerful dunk through the hands of Sarr, and converted the foul shot for a 61-46 lead with 9:24 left.
The Hokies (13-4, 4-2) pulled within a game of Louisville and Duke, which suffered its first conference loss at Clemson, at the top of the ACC standings. The Demon Deacons (8-8, 1-5) suffered their third straight loss without standout guard Chandee Brown.
Virginia Tech, which opened up a 20-point lead with 6:32 left, coasted home from there. The Hokies shot 15-for-25 (60%) in the second half.
Sarr led the Deacons with 18 points, nine rebounds and two blocks. Brandon Childress, who was in early foul trouble, added 16 and Andrien White had 14. The Deacons were hurt by 18 turnovers.
BIG PICTURE
Virginia Tech: The Hokies claimed a victory crucial for their hopes to stay near the top of the ACC standings. The Hokies again showed their toughness, winning their third ACC road game. Radford, who also had four steals.
Wake Forest: The Deacons are struggling without the inside-outside offense of Brown. A victory would have been a big boost for a team that has committed 52 turnovers during its three-game losing streak and is on course for a fifth losing record in coach Danny Manning’s six seasons.
UP NEXT:
Va. Tech: The Hokies play host to Syracuse on Jan. 18.
Wake Forest: The Deacons play host to Boston College on Jan. 19.
____
More AP college basketball: https://apnews.com/Collegebasketball and https://twitter.com/AP_Top25