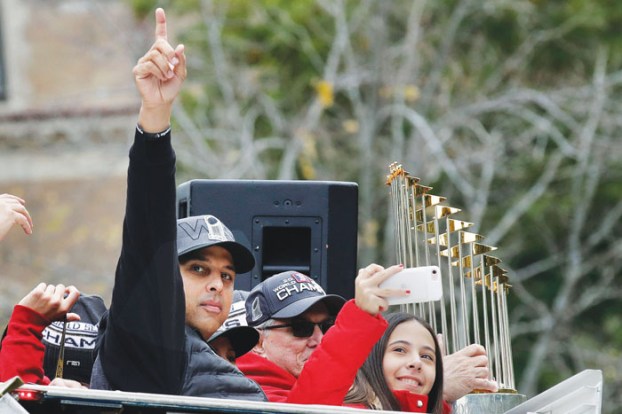 FILE— In this Oct. 31, 2018, file photo, Boston Red Sox manager Alex Cora rides with the trophy during a parade in Boston to celebrate the team's World Series championship over the Los Angeles Dodgers. Cora was fired by the Red Sox on Tuesday, Jan. 14, 2020, a day after baseball Commissioner Rob Manfred implicated him in the sport's sign-stealing scandal. (AP Photo/Charles Krupa, File)

BOSTON (AP) — The Boston Red Sox need to find a new manager, and it sounds like they haven’t gotten over their old one.

Heaping praise on Alex Cora a day after showing him the door, Red Sox owner John Henry said on Wednesday the team was going to miss “just about everything” about the man who led Boston to the 2018 World Series title only to be torpedoed in a cheating scandal.

“It was a sad day because we all have such respect for Alex,” said chairman Tom Werner, who was one of several Red Sox officials keeping in touch with the deposed manager since his departure. “He admitted that what he did was wrong, but that doesn’t mitigate, in our opinion, the extraordinary talent that he has. And we continue to be very fond of Alex.”

A player on Boston’s 2007 World Series-winning team who led the club to another title in his first year as a rookie manager, Cora was ousted on Tuesday, a day after baseball Commissioner Rob Manfred identified him as the ringleader in a sign-stealing scheme when he was the bench coach for the 2017 Astros.

Major League Baseball is also looking into whether Cora installed a similar system in Boston after arriving the following year. No conclusions have been reached, and there is no timetable; the Astros investigation took two months.

“We would ask that everyone to reserve judgment until MLB completes its investigation and determines whether rules were violated,” Henry said. “I can tell you that we are working with baseball to the fullest extent possible.”

The Red Sox insisted that Cora’s departure was a mutual decision because he could not continue to lead the team effectively. Team president Sam Kennedy said he anticipated a day that Cora would return to baseball.

“While it was difficult personally for a lot of people, (and) professionally, it was ultimately an easy decision for the Red Sox and for Alex,” Kennedy said. “Alex is an incredibly talented manager and accomplished great things with us. He expressed remorse. He apologized yesterday to us for the embarrassment that this caused.”

The decision leaves the Red Sox, who went 84-78 and missed the playoffs last year for the first time since 2015, without a manager and less than a month to find one before spring training. Chief baseball officer Chaim Bloom, who was hired in October, said he hadn’t had time yet to formulate a short list.

“The short answer is we don’t know yet,” Bloom said when asked about the current coaching staff. “Obviously, this just happened.”

Complicating the search for a replacement is that the Red Sox don’t know if anyone else will face sanctions from the commissioner. And with just a month before spring training other teams may be reluctant to grant permission to interview members of their staffs.

The Astros are also looking for a manager, and New York Mets manager Carlos Beltrán was also implicated in the cheating from his time in Houston.

“There’s no question it’s an unusual time to be doing a managerial search,” Bloom said, “Being this close to spring training, it’s impossible for that not to be a factor in how we proceed. But it’s not going to be the only factor. And we want to make sure we do this justice.”

Bloom said there will be internal candidates, along with ones from outside the organization. Among those who have been mentioned are Jason Varitek, the former catcher who is now a special assistant, and bench coach Ron Roenicke, who managed the Milwaukee Brewers from 2011-15.

“Jason is a beloved — not only alum, but member of our organization,” Kennedy said. “Our hope and desire has been for him to continue to take on more and more of a role as he develops the next stage of his baseball career.”