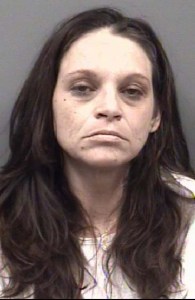 KANNAPOLIS — A Kannapolis woman who was found to be living in a shed now faces felony drug possession charges after a deputy who was looking to serve a warrant for child support found her, according to the Rowan County Sheriff’s Office.

Leigh Ann Hatley, 35, was charged with felony possession of a schedule II controlled substance, misdemeanor possession of drug paraphernalia and misdemeanor resist, obstruct, delay an officer. She was also charged on the child support warrant. Hatley remains in the Rowan County jail under a $3,100 secured bond.

A deputy received a tip that Hatley was living in a shed at a property in the 5900 block of Wright Road. The officer knocked on the door several times and identified himself as a Rowan Sheriff’s deputy. He could see a light coming from the shed, but no one opened the door or responded. The deputy went to a neighbor, who gave the officer a telephone number for the property owner, said Capt. John Sifford.

The owner gave the deputy permission to enter the shed. The officer returned to the shed and knocked again. A woman told the deputy she was not clothed. He instructed her to put clothes on and she opened the door. The deputy told Hatley she was being arrested for child support. She asked him to get her wallet inside her purse.

The deputy searched the purse first and found a yellow cut drinking straw with a white residue on it. Sifford said Hatley admitted the substance was cocaine. The deputy asked for consent to search the rest of the shed and she consented. She told the deputy she had a bong in the clothes hamper.

A second deputy had arrived and began assisting in the search. The deputy found a phone case, which had a digital scale, grinder and plastic bags inside it. The bond contained a crystal-like substance believed to be methamphetamine. The substance was submitted for tests to determine whether it was meth.

• A woman was issued a citation on Friday after a call in reference to a suspicious person and vehicle. Carla Tennant, 32, was cited for possession of schedule IV and possession of marijuana paraphernalia while in the 100 block of Broom Street, Rockwell.

• A woman was assaulted on Friday during a domestic situation in the 100 block of Susan Lane.

•  A woman reported on Friday she was the victim of credit card fraud while in the 900 block of Peeler Road.

• Twisted Cable Towing reported on Saturday someone stole a vehicle from the business in the 5300 block of Woodleaf Road.

• A man reported on Saturday he was the victim of an assault while in the 200 block of Kelly Drive.

• A man reported on Saturday he was the victim of a domestic assault while in the 4400 block of Mount Hope Church Road.

• A woman reported on Saturday she was assaulted while in the 400 block of Erwin Temple Church Road, Woodleaf.

• A man reported on Saturday someone stole items from the 300 block of Windsor Wood Trail, Rockwell.

• Lionel Joseph Tucker, 30, was charged on Friday with misdemeanor possession of a controlled substance schedule VI up to 1/2 an ounce while in the 1400 block of West Jake Alexander Boulevard and Industrial Avenue.

• Sabrina Beth Sutton, 34, was charged on Saturday with misdemeanor possession of drug paraphernalia while in the 900 block of Coldwater Street, Kannapolis.

• Jeffrey Scott Bailey, 52, was charged on Saturday with misdemeanor assault on a female while in the 400 block of Erwin Temple Church Road, Woodleaf.

• Kristan Shantal Karriker, 30, and Amber Dalene Souther, 34, were both cited on Sunday for simple assault/affray while in the 200 block of Peaceful Lane, China Grove.

• Rebecca Lynn Taylor, 39, was charged on Sunday for misdemeanor simple assault while in the 200 block of James Drive, Cleveland.

•  A report of a breaking and entering occurred in the 100 block of East Fisher Street.

• A .9mm shell casing and a small amount of marijuana were recovered during a response for a shots fired call in the 300 block of South Shaver Street.

By Carl Blankenship carl.blankenship@salisburypost.com SALISBURY – The end is near for Rowan-Salisbury Schools’ second lease on Apple products for its... read more