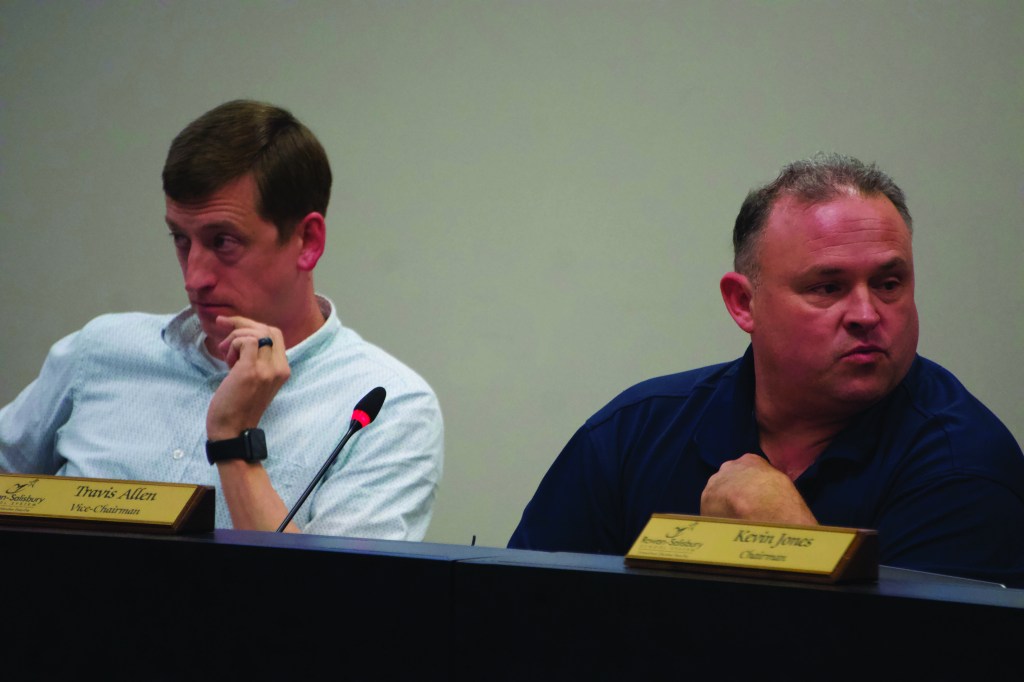 Carl Blankenship/Salisbury Post - BOE members Josh Wagner and Travis Allen during the discussion about Knox Middle and Overton Elementary. The board decided to explore the possibility of a K-8 as well as redistricting.

SALISBURY – The  future of Knox Middle and Overton Elementary schools remained undecided after a Monday meeting of the Rowan-Salisbury Schools Board of Education.

But the board revisited the possibility of building a K-8 school to replace both of them.

The controversy began as a result of plans to make major renovations to Knox, which is in a state of disrepair.

One option that has gained community support involves building a new K-8 facility between the two schools. In that scenario, students would continue to attend their respective schools until the new facility is finished, and then consolidate into a single school.

In a K-8, the old Knox and Overton facilities would be consolidated into one new facility. The district would reduce the number of facilities it operates by one, no students would be displaced and there would still be an updated building for all.

In another scenario, which has drawn widespread opposition, Knox students would be relocated to nearby Overton during the middle school’s renovation. The students at Overton would then need to be placed at other elementary schools. Ultimately, the Overton facility would be facing closure when Knox students were moved back to the renovated school.

At the Monday night meeting, the issue was placed on the agenda for discussion, with Board Chairman Kevin Jones saying he wanted to bring the issue back to the board so it could make some movement.

Board member Josh Wagner weighed in on the options. “I’ve kind of gone back and forth in terms of my feeling on this simply because our capital funds, even though we’ve gotten a lot more money given to us by the county, they’re always limited to some extent,” he said. “I am definitely not opposed to a K-8. I think there’s some value to that. However, my opinion is that, if we’re going to spend the money to build a K-8, we need to take some action. We’ve talked about this for a number of years, but to consolidate some of the elementary schools that we have that just simply do not need.”

Other members expressed their support for exploring a K-8, as well as redistricting.

The board made no decision on whether to go ahead with a K-8 project. Members did pass a motion made by board member Alisha Byrd-Clark, whose district includes Knox and Overton, to instruct RSS staff to gather information on what a K-8 project and consolidation of the two schools, as well as redistricting, would look like.

Monday’s meeting also featured a handful of other capital projects, notably an overview of a new addition to Salisbury High School’s gym and some HVAC school projects.

ADW Architects was given the go ahead to proceed to the next phase of a gym addition.

The board also has set aside $6.5 million for HVAC projects, but they had to be brought before the board because their costs exceeded $90,000. All were approved.

The cost of the projects at six schools are: