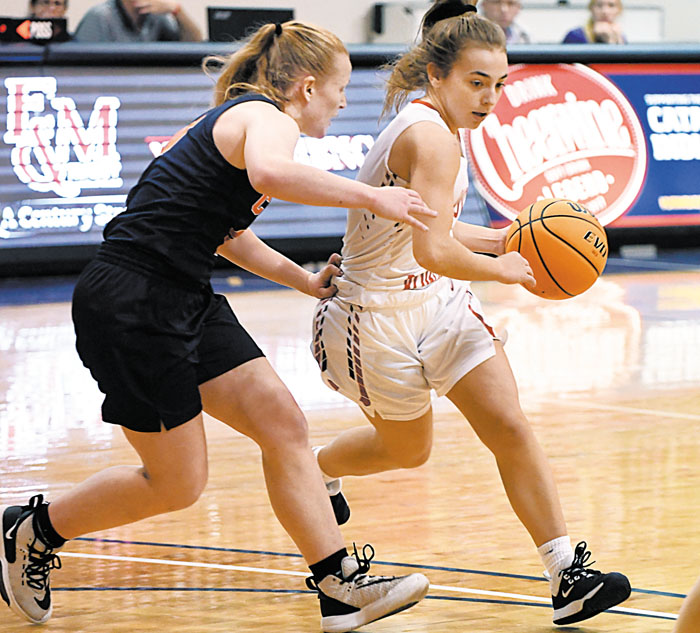 West Rowan, champions of the Dale’s Sporting Goods Sam Moir Christmas Classic, came into the game undefeated. West was ranked eighth in 3A by MaxPreps, while the Mustangs, who lost to Carson and Salisbury in the Christmas tournament, were 24th.

The 43 points were a season low for West. The Falcons had been averaging 61 per game.

“Our girls are still a little disappointed that we didn’t get a chance to play for the Moir championship,” East coach Kevin Holland said. “They also know how huge this week is for us because we’re starting conference with West and Carson. It would be easy to be 0-2, and that’s a hole we didn’t want to be in.”

“This was a great one for us to win,” said Harrison, who is closing in on 900 career points. “We were all together.”

The first half was a defensive struggle for both teams, with the Mustangs focusing on containing Abigail Wilson, the county’s leading scorer.

East scored the last four points of the first half to take a 21-17 lead, and the Falcons (12-1) were in serious foul trouble by halftime.

Then East had a spurt early in the third quarter, pushing its lead to as many as 15 points at 34-19.

Grace Eagle made two 3-pointers in that run, while Harrison made one.

“We had a great start to the second half and we got up by a lot,” Harrison said. “But then West came back.”

Wilson, who finished with 23 points,  brought the Falcons back, but East still was ahead by 40-31 heading to the fourth quarter.

“We did a great job against Abigail in the first half, but then she went off in the third quarter,” Holland said.

East missed some layups, as the Falcons’ comeback continued in the fourth quarter. With 3:52 left, East’s lead was down to 42-39.

But that’s when it helps to have a senior point guard like Harrison. She took command down the stretch.

“Adalie was so strong the whole game and kept us under control so that we could close it out,” Holland said.

With East leading 46-43, Harrison made two key free throws in the final minute to make it a two-possession game.

“We were able to stay calm and we finished,” Harrison said.

East beat West in the conference tournament last season, but the Falcons had won the last eight regular-season conference contests.