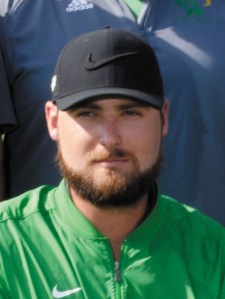 SPENCER — Patrick Hampton is only 26, but he’s ready to be the head coach for North Rowan’s varsity baseball team.

More people probably call him “Petey” than Patrick. His given name is Patrick Dwayne Hampton. His uncle, the late Darrell Misenheimer, and his aunt, Cathy, called him “P.D.” when he was a youngster.  A lot of people thought they were calling him “Petey,” and somehow that caught on.

Hampton’s previous head-coaching experience is in a different sport (football) and has been at the jayvee level, but he’s prepared. There’s been a lot of sports knowledge and a lot of ballgames crammed into his relatively brief life.

His parents (Rick and Gay) were athletes, so he was immersed in sports at a young age. He closely followed the successful adventures of his older siblings, Ben (in baseball and football) and Hillary (basketball, softball and volleyball).

“It runs in the blood,” said Hampton, who will turn 27 in March. “I’ve been around this my whole life.”

There was a lot for Patrick to live up to as the little brother, but he made his own mark. He started at tight end for West Rowan’s 3A football state champions in 2009 and 2010 and was one of the better pass-catching tight ends in county history. As a senior, he had 45 catches for 833 yards and eight touchdowns.

“Baseball was always my favorite sport to play growing up, and it was the sport I enjoyed the most right up to high school,” Hampton said. “But I was there during a special time for football at West. We were just really good in football. There was so much winning and so much team camaraderie that football started to take precedence for me over baseball.”

He also was a two-year starter for West’s varsity baseball team, smacking the occasional homer and making plays in the outfield. Coach David Wright usually used him in right field his junior year. As a senior, he played center field for Chad Parker, the coach who replaced Wright.

“I was a catcher growing up, but a knee injury forced me to make the move to the outfield,” Hampton said. “That was all probably for the best. We had some very stout catchers at West, but I was able to come along and learn from players like Brantley Horton, Jon Crucitti and Thomas Hester and earn a good role in the outfield.”

After graduating from high school in 2011, he was part of Catawba’s football program for one season.

He started coaching very young. He wasn’t much older than the players when the late Scott Young put him in charge of West Rowan’s tight ends in 2012.

“Coach Young was good enough to give me a little taste of coaching, and I fell in love with it right away,” Hampton said.

He coached West’s tight ends for a second autumn in 2013. In 2014, he moved up to the title of “offensive line coordinator.”

Patrick joined his brother on North’s staff and would become an integral part of North football as varsity offensive line coach and jayvee head coach.

Patrick, who makes his living working for the The Rowan/Kannapolis ABC Board,  served as an assistant baseball coach at North the last two seasons, working under former head coach Mike DeSantis.

“I’ve always loved the game of baseball, and I love the kids at North,” Patrick said. “It wasn’t hard to get back out there and do everything I could to help out as an assistant. Then when (AD) Mark Woody asked me being the head coach for this year, it was an exciting feeling.”

Hampton gained some valuable baseball experience as an assistant, even though North didn’t experience overwhelming success. North was 16-26 in 2018-19 and went 15-17 in the 1A Yadkin Valley Conference. North was fifth in the league standings in 2018 and tied for sixth last spring.

North won the 2A Central Carolina Conference championship in 2016 (Aaron Rimer’s last year as coach), but hasn’t won a playoff game since 2014 and hasn’t made it past the second round since 2011.

“I would say that our main goal for this season would be to put North Rowan baseball back on the map,” Hampton said.

It’s possible that could happen.

Goodine projects to be a devastating slugger/base stealer/closer in 1A, while Spry is being counted on as the ace pitcher.

“The Legion program reached out to us last year and said they really needed our kids, and we urged our guys to go out,” Hampton said. “Coach Gantt does baseball as well as anyone has ever done it, and we figured that even if our guys didn’t make the team they’d get three days of great coaching. As it turned out, they got that great coaching all summer.”

“The potential is there for a breakout season,” Hampton said. “We’ve got some excellent guys, and they are guys who are willing to work hard. It’s not like we have to beg this group to put in the time.”

Scott Maddox, the former Salisbury head coach, will assist Hampton, who can also lean on his brother and former head coach Bill Kesler for advice.

“I’m glad Scott was willing to take on a role as a mentor,” Hampton said. “He’s got a lot of wisdom that I can take advantage of. I’ve still got a little anxiousness right now, but by the time we get started, I’ll be ready to go.”