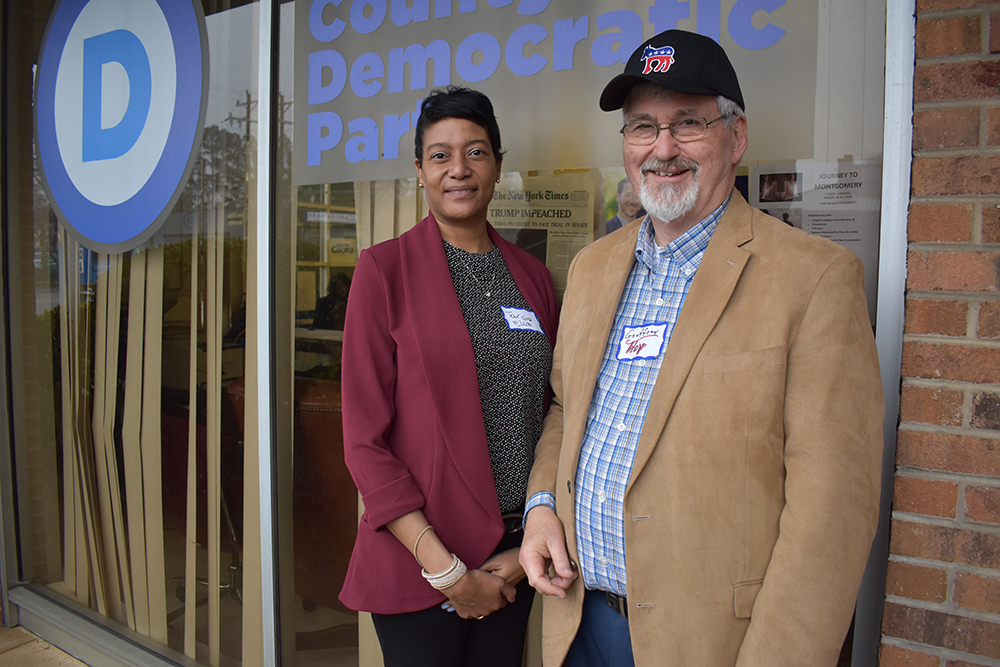 Although Democrats Geoffrey Hoy and Tarsha Ellis will face off in the March 3 primary for N.C. Senate District 33, they share a similar platform.

Both Ellis and Hoy filed for the primary in the 11th hour of the filing period, just before it closed on Dec. 20.

Hoy, as the Rowan County Democratic Party chair, said he was pressured by the state party and Gov. Roy Cooper to find a challenger against Republican incumbent Sen. Carl Ford. Over in Stanly County, Kevin Taylor, the county party chair, was getting the calls too.

“We didn’t know that each of us were searching for someone,” Hoy said.

Taylor found Ellis, a friend of his and native of Salisbury, who agreed to run.

Ellis went to the Board of Elections office that Friday morning and filed. She returned home and called Taylor to tell him the good news.

Hoy filed an hour later to give a Democratic option for the state senate seat, not knowing about Ellis.

“To me the biggest thing is we have two Democrats running instead of none, so you have a choice,” Ellis said. “Isn’t this what it’s about having choices?”

Ellis and Hoy talked that afternoon after filing. They have similar objectives for the seat: to expand Medicaid, do a better job with education and continue making strides in economic development while considering equity.

“We want a Democrat to win and give Sen. Ford the opportunity to retire,” Hoy said.

They have decided no matter the outcome in March they will support each other.

Ellis said new ideas and someone willing to make changes are needed.

Having two Democratic candidates will bring more attention to the party, Ellis said.

Hoy said the presence of two candidates has also ensured both are campaigning hard. They have begun to make appearances at meetings.

“The Democrats are starting their campaign now,” Hoy said. “Had we not been challenging each other then we would get around to it in maybe May. This way we are both out there.”

It was past the end of the filing period for Rowan County commission when Theodore Geary made the decision he would run.

On Thursday, Geary went to the Rowan County Board of Elections to begin the process to be added to the November ballot as an unaffiliated candidate.

He and other people who want their names to be on the November ballot must get 3,624 petitioners, which is 4% of registered voters in the county on Jan. 1, according to Elections Director Brenda McCubbins. The candidate must get to the 3,624 number by noon on March 3.

McCubbins recommended aiming for 4,000 petitioners, because the office will spend 15 business days verifying signatures after the deadline. The petitioners have to include their name, residence, birthday and signature.

To be a write-in candidate for the county commission, they must have 100 signatures by Aug. 5 at noon. The ballot will not have a write-in line unless the candidate petitions.

At first Geary didn’t intend to run, but then saw the need for a commissioner who had a five-year plan geared toward economic development. Economic development can come through creating alternative energy sources and establishing a community for relocating climate change survivors.

“Even if I don’t win, the message will be out there,” Geary said.

Geary plans to get support from Democrats and seniors, who are concerned about their grandchildren. Geary is registered as a Republican.

Geary ran an unsuccessful race to be a Republican candidate for Iredell County Board of Commissioners in 2010. He moved to Salisbury in 2011.

County Board of Elections looking for precinct officials

The Rowan County Board of Elections is looking for registered voters to help at the polls during the primary election.

Every voting locating is staffed with a chief judge, a Democrat and Republican judge and assistants.

The qualification to be appointed a poll worker include being able to vote in Rowan County, of good repute, being able to read, write and follow direction and being knowledgeable of basic computer skills.

Those interested should fill out an interest form at rowancountync.gov/FormCenter/Board-of-Elections-6/Interest-Form-50.