Ask Us: Why was Faith Road paving done during daytime? 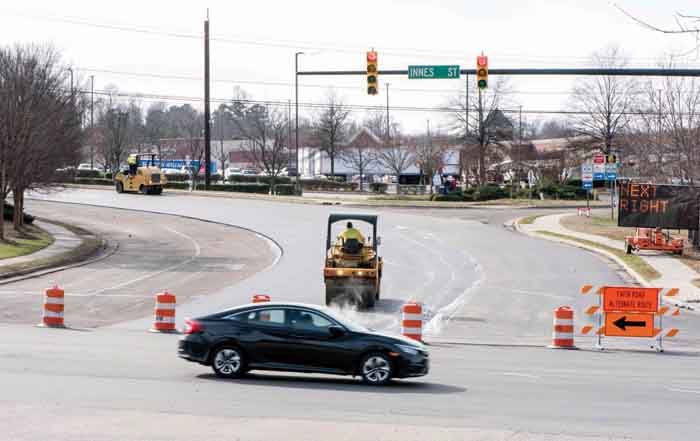 JON C. LAKEY/SALISBURY POST Crews from Blythe Brothers Asphalt work on on the resurfacing Faith Road near Bendix drive as part of improvements along Newsome Road Extension project. Traffic has been rerouted as the road is being resurfaced. Salisbury,North Carolina,1/9/20.

SALISBURY — Frequenters of Salisbury’s downtown may have noticed closures last week during the daytime for roadwork done on Faith Road between Innes Street and Avalon Drive.

The road closed on Monday, Jan. 6, for milling and paving work and was closed to traffic daily from 9 a.m. to 6 p.m. through Friday, Jan. 10.

According to Kelly Seitz, resident engineer for Division Nine of the North Carolina Department of Transportation, which includes Salisbury, the improvements included:

The widening of the Faith Road and Innes Street Market intersection is set to “increase efficiency with additional lanes,” Seitz said. The final asphalt on Faith Road was put in place Friday.

A reader has asked why the repairs were done during the daytime and what traffic controls were put into place for the duration of the repairs.

“The original contract time restrictions limited activities during the hours between the morning and afternoon peaks of 6-9 a.m. and 3-6 p.m.,” Seitz said. “However due to current colder temperatures and weather patterns we have provided extension to the contractor’s operations in an effort to expedite the paving operations.”

Forty degrees is the lowest point that is used for putting down the new pavement surface, Seitz said. Recent nighttime lows have been reaching below that, “so it’s better to do it during the daytime,” he said.

As far as traffic control in the unusual traffic patterns, law enforcement was not included in the contract, Seitz said. However, “flaggers are being utilized daily to direct traffic.”

Innes Street Market is still due for a milling and paving update, Seitz said. That work will also be weather-dependent.

The project is set to be finished in April of this year. A lot of the other remaining work is “behind-the-curb” work like sidewalk work, Seitz said, as well as work on signals, signage and pavement markings.