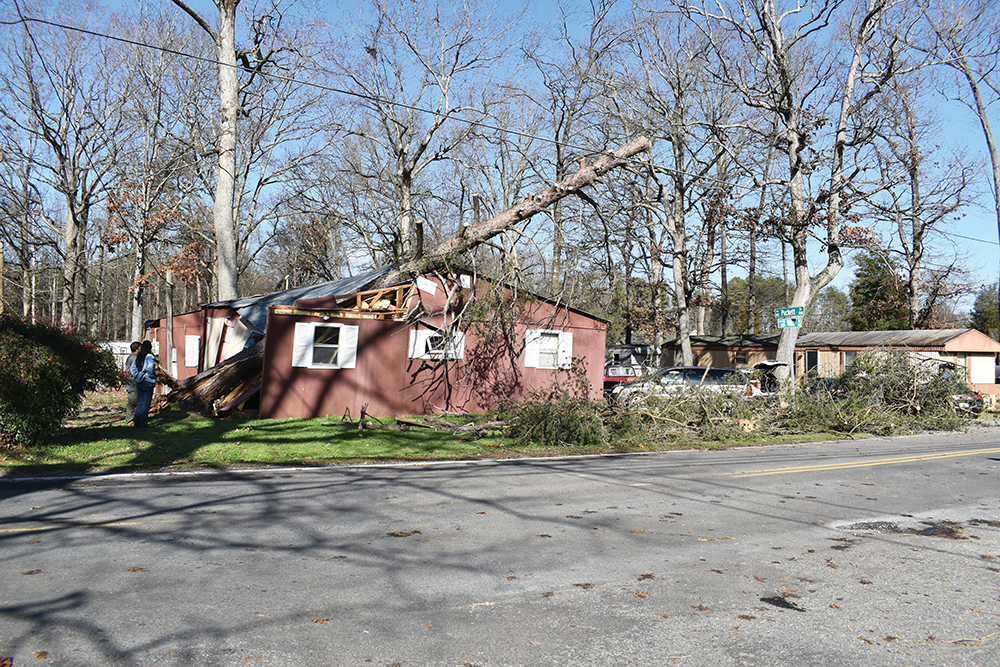 A tree fell on a home off Wilcoy Road in Rockwell due to the storms overnight Saturday.

ROCKWELL — At 10:30 p.m., Mandy Newton and Ricky Berger are generally finished putting their four-month old Carter to bed and preparing for bed themselves.

Newton was having trouble with her cellphone and ended up staying up later than usual. Around that time, she felt her bedroom move. She asked Berger to come into the room and he felt the same.

“I could feel things shaking, and I was like, ‘Something is totally wrong,’” Newton said. “This whole room is shaking right now and that probably when (the tree) was laying on the house. We didn’t realize it had already began pushing on the house as hard as it was.”

Then they heard a cracking noise. It was a pine tree falling on their home on Wilcoy Road in Rockwell.

In a minute, they evacuated the house, grabbing Carter and whatever they could.

“I broke down,” she said. “I was so scared I didn’t know what to do. I was just covering the baby.”

The tree’s toppling was caused by a line of thunderstorms that moved through the county on Saturday night, prompting a tornado watch and severe thunderstorm warning. According to Steve Monday with Rowan County Weather, the highest recorded wind gust was 47 mph. A contributing factor to the numerous downed trees was saturated ground from rainfall this month, causing root systems to be weak. First responders were called to the scene of a number of incidents. Among others, Rockwell City Fire Department responded to a tree falling at a home on Redbird Lane in Rockwell. The Bostian Heights Fire Department responded to a report of a tree on a home awn Sable Road in China Grove.

Newton said she was aware of the storms but not fearful. She was just surprised about the amount of wind.

After it first fell, the tree continued to push into the home. At about 2 a.m., the tree fell again, buckling the whole house, she said.

“It fell twice,” Newton said. “First on the house. Then the wind blew it harder. The whole house shifted off of the foundation.”

The front steps and carport shifted with the tree falling.

Now, Duke Energy has turned off power to the home and Newton said the property owner of the land would remove the tree on Sunday.

Newton was unable to go into the home until the tree is removed. On Sunday, she hadn’t seen the incident’s effect on her bedroom, the baby room and her daughter’s room.

The home is something of a family heirloom. It had been once owned by Newton’s grandmother and mother before being passed down to her in 2007 after her mother’s death.

Seeing the home on Sunday morning was hard for Newton, as she thought of her three children.

“It’s just heartbreaking, more so for my children, because I don’t know where we are going to go,” Newton said. “I didn’t see anything until this morning, because I was too scared to walk over last night and look at anything.”

The five are staying at a neighboring family member’s house for the time being.

Although the destruction was still raw, Newton said she has learned materialistic things aren’t everything. She’s also is thankful for her neighbors, tearing up as she said one walked down the road and gave the family $100.

The American Red Cross also provided them with a gift card and resources.

Newton is unsure of where to go from here.

“I don’t have a game plan, and I feel lost right now,” she said.

The first step will be looking for housing resources, Newton said.