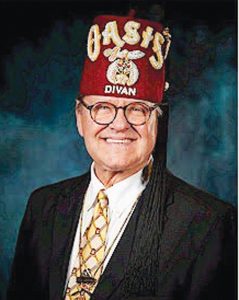 CHARLOTTE — A family tradition continued Jan. 4 as long-time Shriner Bill Carter of Blowing Rock became the Potentate and Chief Executive Officer of the Oasis Shrine temple. Oasis covers the territory from Greensboro, Pinehurst, and Charlotte to the east and covers 50 of North Carolina’s 100 counties into the Asheville area, and according to Carter, and is the largest Shrine organization in the world. Carter also said that Oasis members are the largest contributors to Shriner’s Hospitals for Children out of the nearly 200 Shrine temples in the world.

Bill Carter’s Shrine connections run deep—200 years deep— Carter saying that Shriners have to also be Masons, and that Masons among the men in his family go back in an “unbroken line to the 1820s, ” and that he is a 6th generation Mason and a third generation Shriner.

Shriners Hospitals for Children is a network of 22 hospitals throughout the entire country offering specialized medical care to children, located throughout the United States, Canada and Mexico. Eighteen of the 22 Shriners Hospitals provide comprehensive pediatric orthopedic care to children, including outpatient and inpatient care, diagnostic services, surgical and medical care, cast and braces, prosthetics, X-Rays, rehabilitation, recreation and continuing education.

The Shriners will have a major meeting in Blowing Rock in June of 2020.