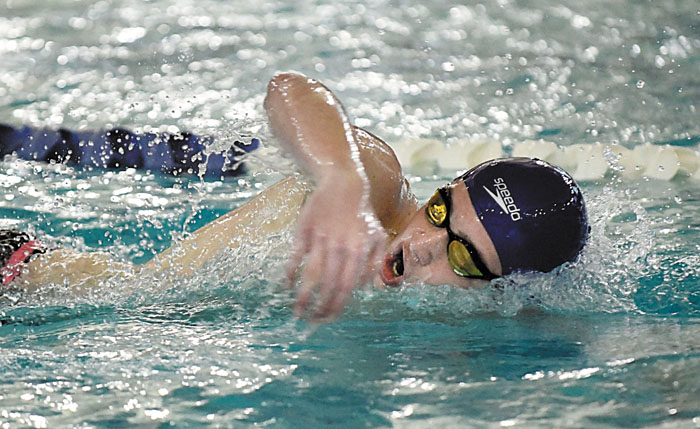 SALISBURY —  After years of watching South Rowan and Salisbury duke it out, Carson’s first county championship in boys swimming happened suddenly on Saturday afternoon at the J.F. Hurley YMCA.

That quartet teamed for two relay wins — and points are doubled in the relays.

“We’ve got four special swimmers,” Carson coach Mel Eaton said. “They’re hungry, When they get in the water they like to win.”

Eaton certainly didn’t put any excess pressure on his guys.

“It’s my first year with Carson swimming, and all I’ve stressed since our first practice is regionals —  let’s qualify as many kids as we can for regionals,” Eaton said. “We hadn’t swam against South Rowan or Salisbury, but we did know that  Salisbury and South always have great swimmers. The only expectation I had for us  was to try to finish somewhere in the top three. Winning the championship? It’s awesome, but I really didn’t expect it.”

The annual county meet came early this year, about two weeks earlier than in 2019, but the only possible dates the Hurley Y had for hosting the event were Jan. 11, and next Saturday, Jan. 18. Coaches opted for the earlier date, leaving the later date as an alternative in case inclement weather forced a postponement.

The scoreboard wasn’t functioning, but other than that, the meet moved along smoothly.

When Carson opened with a 200 medley relay victory over a South foursome that included the Raiders’ top swimmer, Braxton Vagner, and a Salisbury group that included the Hornets’ top gun, Roshen Amin, the tone was set.

Then Epley pulled away in the 200 free (by 15 seconds), defending his title in that event, but with third,  fourth and sixth places, the Raiders actually got a lot more points from the 200 free than the Cougars.

That’s the formula South used to stay with striking distance throughout the day. Carson won eight of the 11 events, but South stayed in the race with its depth.

“We definitely felt like we were the underdogs and I was a little surprised that we won,” said Sever, a 15-year-old phenom who is the son of Michael Sever, Catawba’s head swim coach. “We knew we had to do everything in our power to win our events. We were up against some fast swimmers, but we did what we do.”

Taylor Sever, his sister, who starred for Carson last season, was there to cheer him on.  She saw her brother win a star-studded 200 IM, topping Vagner and Amin.

Amin interrupted the train of Carson victories by winning the 100 butterfly. He finished 10 seconds ahead of South runner-up JD James.

“Catawba (pump issue) has been out of commission for training, so we just did what we could to get ready for today with only a couple of practices since Christmas, ” Amin said. “I didn’t have any great expectations at all for myself today, but it’s the county meet. You start swimming, and then that adrenaline always kicks in. I pushed myself right to the last second I was in the water.”

Sever won the 500 free for the second straight year (by 53 seconds), with Harrison Ward picking up another second place for South.

Then Sever was back in the water quickly, anchoring the winning 200 freestyle relay team for Carson.

Jackson won the backstroke for the Cougars, before Vagner swam a school record 1:04.33 to top Epley in the breaststroke. That was South’s lone first place.

“There’s a whole lot of season left and the most important stuff is still ahead, but winning a county championship, that’s a plus,” Eaton said. “This means bragging rights, and our kids deserve that. They’ve put in the time.”