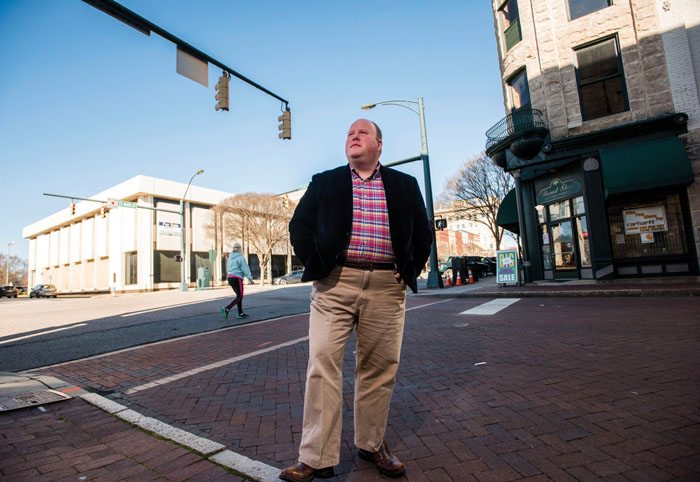 From an early age, Matthew Michael Brown learned the importance of community and relationships. He’s the son of Michael and Brenda Brown, who still live in his hometown of Burlington.

“If you’re not giving back and making it the best you can be, you don’t have a place to complain about it,” says Matthew, 37. “This community of Salisbury invests and gives back to make it what it is, and it’s so beautiful.”

“The job was recommended to me by an Episcopal priest,” he says. “I wasn’t looking to leave, but the Holy Spirit has a way of bringing clarity to our lives, sometimes when we least expect it. The beauty of where I’m going is that I can accomplish some things on a much bigger scale, and there’s a need there.”

Matthew says he’ll be taking lots of beautiful memories from his time in Salisbury.

• His 30-voice choir at First Methodist. “They are an extraordinary group of people. They have been like a second family to me.”

• His biggest risk and proudest moment, hosting a benefit concert for Rowan Care Alliance — an AIDS care service — at First Methodist. AIDS remains a controversial subject for a small town, and there are still cases here, Matthew notes.

• The night Alice Brady hosted an evening of opera at her home, which included a private opera performance. “It was bringing people together for something special and unique. I remember sitting there thinking, did that really just happen?”

• His favorite meal: an authentic homemade Chinese dinner by Tom Staats and Tom and Cyncie’s house, along with the Staats, Bud and Betty Mickle, and Charlie and Rachel Bernheim. “It was one of my favorite evenings in Salisbury.”

Matthew says he never minds being the single person at small dinner parties. “I like the solo life.”

• His favorite restaurant meals: watermelon salad at La Cava, the no. 5 substitute Pesto Pasta Salad at L.A. Murph’s, and anything from Sidewalk Deli.

“Betty is one of the sharpest pencils in the box,” Matthew says. “I don’t know anyone else who has the pulse of this community. She is the epitome of good citizenship.”

• And speaking of Betty, he can’t say no to her, which is how he ended up on the griddle at the annual Rowan Museum Antiques Show. The griddle offers pimento cheese, chicken salad, or ham and Swiss sandwiches. When one customer was holding up his line, he had to tell her, “This is not Burger King.”

• Pet therapy with Honey, a labradoodle owned by Reid and Tina Acree. “I have so much respect for both these individuals. Their quiet generosity and loving spirit have sustained me through some sad times.”

• Likely the saddest time was losing his dear friend Julie Steele. He met her when he took a concert poster to First Presbyterian one afternoon, where she was volunteering.

“We should have dinner,” she said.

After that, Julie and her husband, Bob, traveled with Matthew to concerts he gave at Trinity Church in Boston and Westminster Abbey in London. He’s also performed at St. Paul’s Cathedral in London, the National Cathedral in Washington, D.C., and Barcelona, Spain. He is a graduate of the N.C. School of the Arts, and received undergraduate and master’s degrees from the Eastman School of Music in Rochester, N.Y.

Julie’s cancer diagnosis was devastating to Matthew, and she died at 63. She did not want a memorial service, and so Matthew gave a memorial concert at First Methodist, even though the Steeles were members at First Presbyterian. It was packed.

“The music and who performed was a reflection of her life,” Matthew says. “Out of all the people in this town, she meant the most to me. She told me it’s OK to be who I am, and to march to the beat of my own drum.”

• Another couple to which Matthew has grown close are Ned and Shully Storey, longtime members of First Methodist.

“Shully was the music librarian for about 30 years, so I saw Shully on a very regular basis,” Matthew says. “We often enjoyed meatloaf sandwiches at Sidewalk Deli. She introduced me to so many people.”

Matthew and Shully spent many an evening having a glass of wine on her back porch, and she hosted a birthday party for him at her home.

“Her living room is the happiest room in Salisbury,” he says. “If I could use one word to describe Shully, it would be ‘peacemaker.’ She has one of the most beautiful souls of anyone I know.”

Matthew learned about Ned’s service in Habitat for Humanity, which inspired him. “They planted seeds for me to see what it looks like to be connected in this community.”

• And if there’s a person who’s connected to this community, it’s Clyde. From the beginning, Matthew has counted on people to keep his life in balance with the cerebral, complex world of music. More often than not, Clyde arranges the altar flowers each Sunday.

“Talk about keeping it real,” Matthew says. “I connected with Clyde on an artistic level because of the beauty he brings to this world. What I respect about him is that you know where you stand. He has one of the biggest hearts I know.”

Matthew’s favorite story about Clyde has to do with two roses.

Clyde left him a voicemail just before Christmas, letting Matthew know he’d check on the arrangements before Christmas Eve. But as he often did, he’d leave flowers at the organ for him. This time, there were two rosebuds there.

“Those two little rosebuds that I left you, that’s me and you. We’re just two buds.”

Many of Matthew’s friends in Salisbury likely feel the same way.