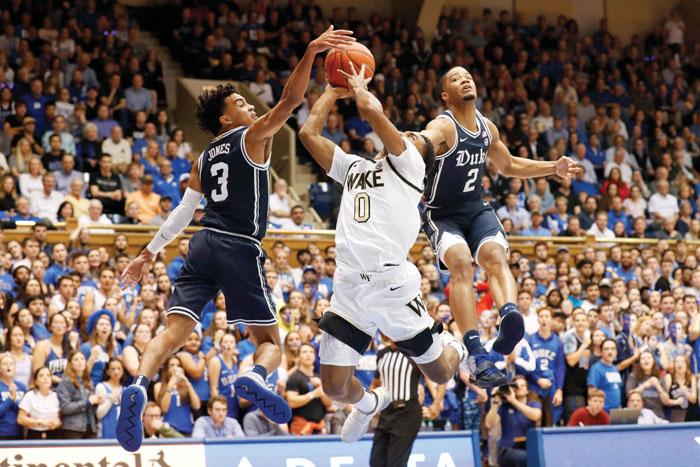 Duke scored on eight of its first nine possessions to take control early. The Blue Devils pulled away with a 27-12 run in which they scored on 13 of 15 possessions while making 11 of 12 shots. Duke led 49-23 at halftime after shooting 63%, including 6 of 10 from 3-point range.

Joey Baker and Jack White scored 11 points each, and Jordan Goldwire had 10 points for the Blue Devils.

Duke won its 900th game at Cameron Indoor Stadium, more wins than any other college team has at its current venue.

The Blue Devils beat Wake Forest for the 11th consecutive time and 21st straight at home.

Wake Forest: The Demon Deacons have enough problems at Duke when they’re at full strength. They have lost 21 consecutive road games against the Blue Devils since Tim Duncan’s senior season in 1997. Without second-leading scorer Chaundee Brown, who missed his second consecutive game with an injury, Wake Forest couldn’t keep pace.

Duke: The Blue Devils are rolling and remain the favorite to win the watered-down ACC. Since their 150-game home winning streak against non-conference opponents ended against Stephen F. Austin on Nov. 26, they have won all 10 of their games by at least nine points.

Wake Forest: Hosts Virginia Tech on Tuesday night, starting a stretch in which it plays three of four at home.

Duke: Play at Clemson on Tuesday night. The Tigers won at North Carolina for the first time in program history earlier Saturday.