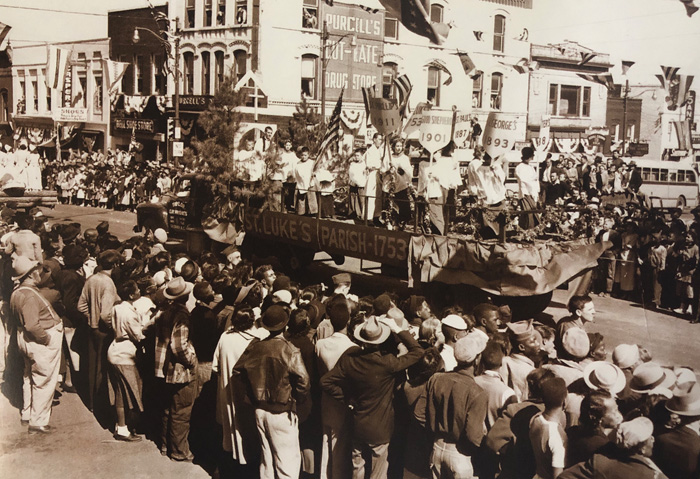 Submitted photo The bicentennial of St. Luke's coincided with Rowan County's. Photo shows downtown Salisbury on 14 April 1953. The Post published this photo in the next day's edition.

SALISBURY — As part of its “Becoming the Beloved Community” series, St. Luke’s Episcopal Church will host Dr. Gary Freeze, professor of history at Catawba College, for a presentation on the parish’s story of slavery and race.

Founded in 1753, St. Luke’s has one of the richest histories among Salisbury’s faith communities. The church’s story has been documented diligently throughout its 266-year history.

But last year, the church noted that a chapter was missing from its history. The story of how Africans and African-Americans contributed to the development of St. Luke’s had not been fully told. The painful role that slavery and racial segregation played in the history of the church was not adequately documented.

St. Luke’s applied for and won a Mission Endowment Grant from the Episcopal Diocese of North Carolina.

This is the final component of work funded by that grant. In 2019, the church hosted an original film screening featuring interviews with African-Americans in the community, and a weekend of lectures by Bishop Will Willimon and Dr. Catherine Meeks.

“This research is not being done to shame those in previous generations,” said Black, rector of St. Luke’s. “Rather, it is meant to help us understand the history that we have inherited so that we can move forward in the process of healing from those wounds.”

The public is invited to the presentation by Freeze on the Sunday of Martin Luther King weekend, Jan. 19, at 4 p.m. in the church’s Parish Hall. St. Luke’s Episcopal is at 131 W. Council St.

More information may be found at www.sls.church/beloved-community.html