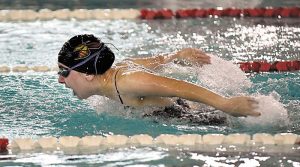 Junior siblings Emily and Katie Knorr, the county’s most accomplished female swimmers, were on a recruiting trip to West Virginia that had been scheduled for a while.

So they missed the Rowan County Championships.

“We’re Knorr-less today,” Salisbury coach Sallie Pittman wailed prior to the meet. “That’s our two best, so I’ll be holding my breath all day.”

Pittman can breathe normally again and smile again.  Salisbury managed to win the program’s fifth straight county championship, even minus the Knorrs.

“The Knorrs are such a big part of our team,” said Woolly, one of Salisbury’s two seniors. “It was a huge loss because they’re record-setters. They’re just insane swimmers. Not having them made this meet a lot scarier, but at the same time, it made it really exciting.”

Could the Hornets do it without the Knorrs? Pittman convinced her team that it could.

“We had to put some creative lineups out there, had to ask girls to swim in events that they don’t normally do,” Pittman said. “Leah Cressler, especially, made some sacrifices. But she never complains. You can beat her up, but she’s going to keep on trucking.”

Cressler, the other senior, had her role dramatically changed. She won the 200 IM, an event she hadn’t competed in this season.

“Not having the Knorrs, I think that pumped us up a little bit,” Cressler said. “We wanted to show that we were still strong enough to win the county.”

Freshman Kate Burton helped a lot. She had a perfect day. Salisbury swept the three relays and she swam on two. She also won her two individual events.

Besides swimming on two relay winners, Woolly took the 100 breaststroke.

“That was probably the most rewarding race for me,” Woolly said. “It’s always special to win an individual event.”

The Hornets splashed to an early lead when Meredith Burton, Woolly, Cressler and Hollingsworth won the 200 medley relay right out of the gate.

Then Kate Burton won the 200 free. She finished 21 seconds ahead of West’s Maggy Moore.

“I’m a freshman, so at first this was all a little intimidating,” Burton said. “But once you get in the water, the nerves go away.”

Next Cressler and Meredith Burton finished 1-2 in the 200 IM.

When Huffman topped Hollingsworth by six-hundreths of a second in the 50 free for another 1-2 SHS finish, it was clear it was going to be the short-handed Hornets’ day.

Kate Burton’s 100 butterfly victory came next, with Cressler right behind her. Burton and Cressler were in lanes 4 and 5, and Burton reached over to bump fists with her teammate.

The Burton sisters, Woolly and Autumn Walser racked up 32 points for the Hornets (relays count double) in the 200 free relay.

Kate Burton went at it like it was the last event of her life. She was third when she hit the water on the anchor leg, but when she left the pool Salisbury was first.

Then East Rowan got its only win of the day — boys or girls— when Brenna Culp prevailed in the 100 backstroke.

“That came out of nowhere,” said a smiling Culp, who also took third in the 200 IM and helped the Mustangs place second in the 400 free relay. “Kind of a nice surprise.”

But the 100 back was still another productive event for Salisbury. Meredith Burton, Clara Brown and Tanja Beck finished second, third and fifth, respectively. That was worth 35 points to the Hornets.

Woolly and Maggie Alexander went 1-2 for the Hornets in the 100 breaststroke. That set the stage for the concluding event –the 400 free relay.

Hollingsworth, Kate Burton, Cressler and Huffman won it for the Hornets by almost 34 seconds.

“When we first found out the Knorrs wouldn’t be with us, our first reaction was, ‘Oh, no, how can we do this?,'” Kate Burton said. “But everyone worked together and we found out we could make up for it.”

NOTES: South  Rowan didn’t win either the boys or the girls championship, but was runner-up in both. In the category of “combined team scores.” South edged Salisbury 551-541.