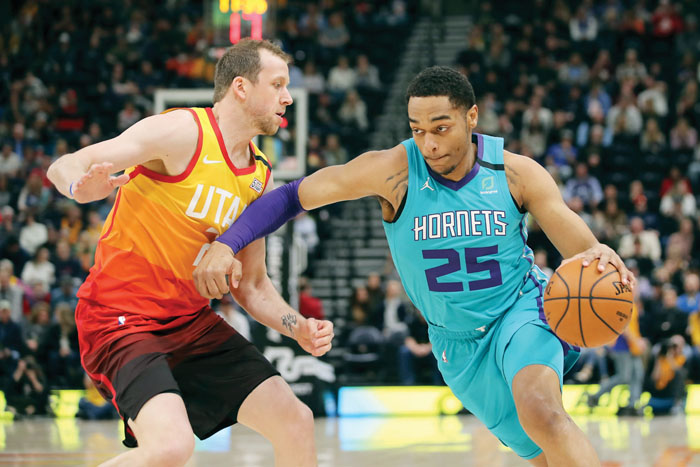 By JOHN COON Associated Press
SALT LAKE CITY (AP) — Rudy Gobert had 15 points, 13 rebounds, and six blocked shots, leading the Utah Jazz to a 109-92 victory over the Charlotte Hornets on Friday night.
Jordan Clarkson led the Jazz with 20 points off the bench. Bojan Bogdanovic added 16 points and Georges Niang chipped in 15 while matching his career high with five 3-pointers.
Utah has won eight straight games and 13 of 14.
Terry Rozier scored 23 points to lead the Hornets. Miles Bridges added 11. Charlotte finished with 21 turnovers, leading to 24 points for the Jazz. The Hornets have lost three straight.
The Jazz swept the regular-season series with the Hornets for the second straight season.
Charlotte struggled under intense defensive pressure from the Jazz from the opening tip. Utah forced seven turnovers in the first quarter alone. The Jazz racked up 14 of their first 19 points off those miscues.
Utah raced to a huge lead. The Jazz outscored the Hornets 19-2 over a five-minute stretch for a 29-11 advantage late in the first quarter. Bogdanovic, Royce O’Neale and Niang combined for four 3-pointers to fuel the run. Gobert bookended the outburst with a pair of dunks.
Utah kept the pressure on in the second quarter. The Jazz extended their lead to 25 points lead three times in the two minutes before halftime, and led 61-36 on a dunk by Gobert.
Gobert was a force at both ends of the court in the first half. He blocked four shots, matching his total blocks over the previous four games.
TIP-INS
Hornets: Charlotte’s only lead of the game came at the 8:25 mark in the first quarter when Bridges knocked down a 3-pointer to put the Hornets up 7-5. … Willy Hernangomez scored a season-high 15 points to lead the Hornets’ second unit.
Jazz: Niang went 8 of 12 from 3-point range over two games against Charlotte this season. … Utah totaled nine assists on 11 first-quarter baskets. … The Jazz scored at least 40 bench points for the fourth straight game. Utah outscored the Hornets 56-39 in bench points.
UP NEXT
Hornets: Visit the Phoenix Suns on Sunday.
Jazz: Visit the Washington Wizards on Sunday.
___
More AP NBA: https://apnews.com/NBA and https://twitter.com/AP_Sports