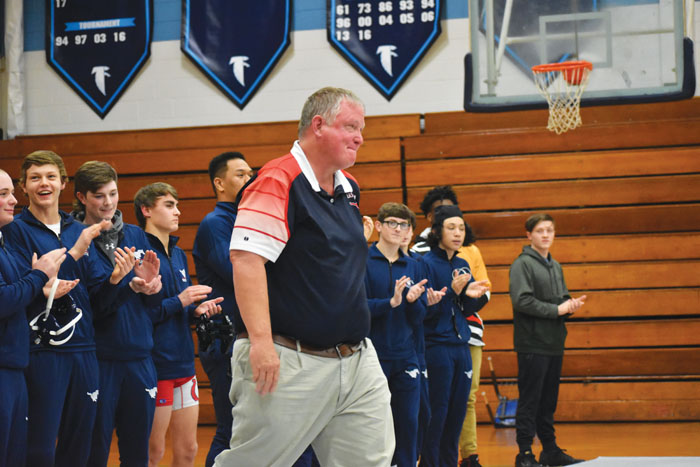 East Rowan wrestling coach Barry Justus walks to the center of the mat as the Mustangs applaud, Friday night at West Rowan. Justus had just learned that he had been selected to the national wrestling hall of fame. ... Photo by Dennis Davidson/Salisbury Post ... Jan. 10, 2020.

Friday night at West Rowan, Justus, who now assists Burris, looked on as the Mustangs warmed up for a match against the Falcons.

Then the fun started.

Burris knew that his mentor was about to be honored. He had been in on the secret.

Brown, who also wrestled for Justus as a student-athlete at East, introduced David Rothwell, a board member of the North Carolina chapter of the National Wrestling Hall of Fame. Rothwell then announced that Justus had been selected for induction on May 7, in Chapel Hill.

“But the wonderful letters of recommendation not only mentioned that Barry is a great coach, but all of those letters stressed what a great person he is,” said Rothwell, a Hall of Famer for his wrestling coaching at both Statesville and Albemarle. “Words like commitment, character and integrity are all used when talking about Barry Justus.”

Another Hall of Famer, Ralph Shatterly, former coach at both North Rowan and West Rowan, joined Justus and Rothwell at the center of the mat. Shatterly read a letter that the North Carolina chapter had indeed recognized Justus’ lifetime service to wrestling. Justus will be enshrined at the National Wrestling Hall of Fame & Museum in Stillwater, Okla.

Justus’ family was then invited to the mat to conclude the brief ceremony. His wife, Frances, placed a Hall of Fame pin onto his shirt, as his daughter, Annie, and son, Jackson, looked on with pride in their father’s accomplishment.

“My legacy is all of my former wrestlers who are out there coaching,” said Justus. “I’m just very appreciative and humbled about what everybody is doing and that I had some influence in their love for the sport. I’ve got former wrestlers coaching everywhere, it seems. I go to a wrestling tournament and we’ll have an East Rowan reunion. That means a lot.”

In the county, in addition to Brown and Burris, Salisbury coach Tim Pittman also wrestled at East under Justus. Pittman was on a Mustangs team that went 23-1 in 1997.

Justus acknowledged that he was completely surprised on Friday night, even when his father-in-law, Jimmy DeArmon, drove up from Charlotte. Justus was still on the East bus when DeArmon was parking his vehicle.

“He said that my mother-in-law (Doris) was out of town, so he came up,” said Justus. “I started laughing and said to him, ‘you’re bored and you came to see a wrestling match?'”

Inside the West gym, Justus then saw his wife and children, and figured they were there just because DeArmon had come. And yes, Doris DeArmon really was out of town.

Justus wasn’t even tipped off by the presence of Hall of Famers Rothwell and Shatterly.

“They’re always showing up together at wrestling matches, because they’re good friends and love the sport,” added Justus. “I’ve seen them together numerous times at area gyms.”

Luckily, Justus had not noticed some of his former wrestlers, who blended into the crowd.

During the match itself, Brown’s Falcons defeated the Mustangs, 54-21, improving their record to 15-2 overall.