Blabon takes the reins of Rowan Chamber at annual gala 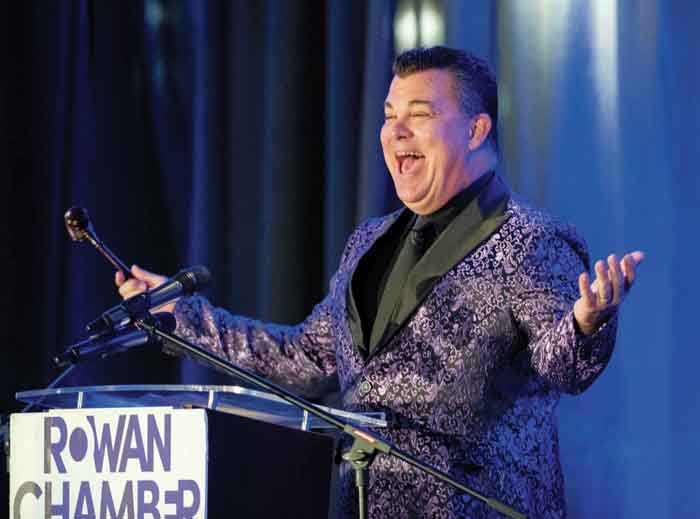 SALISBURY – A new board chair was named along with three new award recipients at this year’s Rowan County Chamber of Commerce gala on Monday night.

This was the 94th annual gala, aiming to bring together businesses from across the county. Hosted at the West End Plaza, Chamber President Elaine Spalding said this was the best-attended gala the Chamber has ever hosted, with more than 310 attendees. During each gala, the previous year’s board chair passes the gavel to the next. This year, Nicole Holmes Matangira, 2019 board chair, passed the position to Gary Blabon for 2020.

Mantangira is of Holmes Iron & Metal and Matangira Recycling. Blabon is the interim president and COO at Novant Health Rowan Medical Center.

Three awards are also given as part of the ceremony.

Robbie Fulton, of Schneider Electric, received the Paul E. Fisher Chamber Volunteer of the Year Award. Fulton was previously chair of the Chamber’s Workforce Development Alliance for more than seven years before stepping down in 2019.

Fulton could not attend, and former colleague Mark Seifel accepted the award on his behalf.

Nicole Sherrill-Corry accepted the award for the organization. NSC opened in 2015 to provide care for people with critical mental health and substance abuse issues. NSC began with only a handful of employees now has more than 50.

“At the end of the day, I do it because it is important,” Sherrill-Corry said at the event, before announcing NSC will begin hosting community days to serve indigent clients.

Osborne is a member of the Chamber’s Governmental Affairs Committee and has been chair of the committee for the past four years. Osborne graduated from West Rowan High School and attended Catawba College.

Osborne’s career has been spent in public service as a teacher, coach, clerk of court, state politician, director of Rowan Vocational opportunities and as general manager of Rowan-Kannapolis ABC. Osborne is an Order of the Long Leaf Pine recipient, which is the highest service award given by the governor, and active in local politics.

Every gala follows a theme, and this year’s was Vision 2020: Our Time to Shine.

Blabon said the Chamber, a nonprofit business advocacy organization with more than 800 members, had a strategic retreat to look at partnering better with the business community. Blabon said he wants to hear from members about what they want.

“A lot of times as leaders, we think we know what the folks want, but we’re going to be doing some surveys and different things,” Blabon said. “We really want to hear what’s valuable to them, what’s meaningful to them, to better support them in the business community.”

Spalding said the Chamber wants to have a focused agenda for the business community in 2020 and to celebrate all the successes in the community.

The program ended with a video highlighting a “top 10” of positive things happening in the county. Notably, the list included the Bell Tower Green Park, the additional lanes on Interstate 85 and the upcoming Chewy.com facility.

Earlier in the program, Emcee Kent Bernhardt offered his own “top 10” with a humorous slant. Bernhardt’s list took jabs at the number of Dollar General locations opened in recent years in Rowan County.

The Smoke Pit catered the gala and Carmen Harper of Hood Theological Seminary gave the invocation.