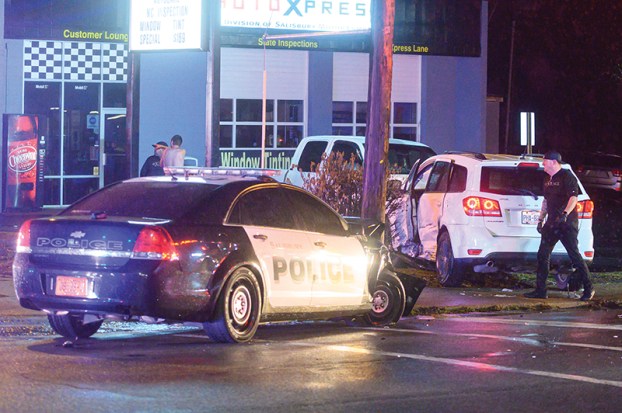 Josh Bergeron / Salisbury Post - A Salisbury police car was involved in a crashed Friday evening at the intersection of West Innes Street and South Merritt Avenue. The police oficer and drive of the white SUV were transported from the scene for observation.

Trooper: No charges in officer-involved crash

SALISBURY — No charges will be filed in connection with an officer-involved car crash Friday night, according to N.C. Highway Patrol First Sgt. G.A. Barger.

Salisbury Police Officer Israel McCants was traveling west on West Innes Street in his patrol car en route to a shooting incident, Trooper C.F. Rogers said. With his lights and sirens on, McCants traveled left of the centerline around two other vehicles, Rogers said. Salisbury Police Chief Jerry Stokes confirmed the officer was headed to a shooting at Lakewood Apartments.

Spencer resident Robin Jones was driving a white Dodge sport utility vehicle and waiting to turn left onto South Merritt Avenue. Jones was yielding to oncoming traffic when the officer struck the rear door of the driver’s side. The SUV then struck a parked vehicle in the parking lot of AutoXpress, located near the intersection.

Both McCants and Jones were taken to Novant Health Rowan Medical Center with injuries that were not serious. The patrol vehicle was likely totaled, according to a police officer at the scene.

Highway Patrol troopers consulted with one another and the Rowan County District Attorney’s Office in determining whether to charge or issue a citation for McCants, Barger said.

The Salisbury Fire Department responded as well as Duke Energy after the patrol car went off the road and struck a utility pole.

An internal review will be completed by the Salisbury Police Department to ensure no policy violation contributed to the accident, Stokes said. The city of Salisbury Risk Management Office will work with all involved parties to determine any compensation for damages, Stokes said.

By Shavonne Walker shavonne.walker@salisburypost.com WOODLEAF — A Woodleaf couple were scammed out of $85,000 worth of cash and items they... read more