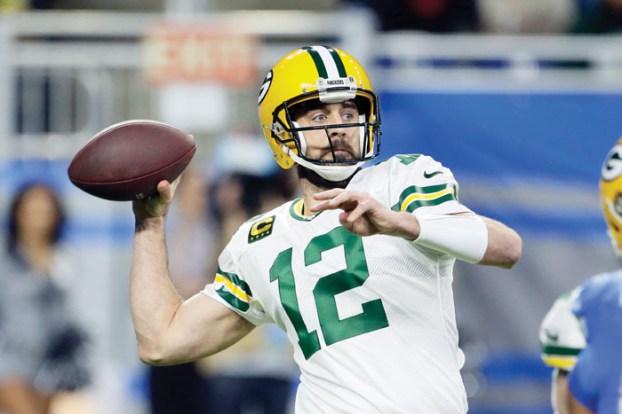 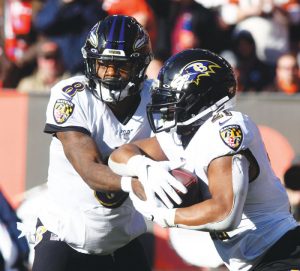 Baltimore Raven quarterback Lamar Jackson hands off to running back Mark Ingram during an NFL football game against the Cleveland Brown at FirstEnergy Stadium in Cleveland on Sunday, Dec. 22, 2019. (Warren Dillaway/The Star-Beacon via AP)

NEW YORK (AP) — The bye-week breaks are over for the top two seeds in the AFC and NFC after a, well, wild wild-card weekend to open the NFL playoffs.

That means it’s back to work for Lamar Jackson and the Baltimore Ravens. Same for Patrick Mahomes and the Kansas City Chiefs. Jimmy Garoppolo and the San Francisco 49ers and Aaron Rodgers and the Green Bay Packers, too.

It’s down to the final four teams in each conference and the divisional round includes intriguing matchups. The Chiefs are the only team of the eight that got at least this far last year; the Ravens, Seahawks and Texans all lost in the wild-card round. The 49ers, Packers, Titans and Vikings didn’t even make the postseason a year ago.

“It’s the playoffs,” Garoppolo said. “You’ve got to love it.”

The 49ers won the NFC West for the first time since 2012, and Garoppolo will make the first postseason start of his NFL career.

“They’re a talented group, defensively,” Garoppolo said. “They make it tough on offenses. That D-line, they’re impressive and they get after you. So it’ll be a good test for us.”

Meanwhile, the 49ers will be tasked with having to stop the Vikings’ offense with a confident Cousins, who was able to put to rest the knock that he’s unable to win a big game. His 4-yard TD pass to Kyle Rudolph against the Saints was the exclamation point — and earned him the game ball from coach Mike Zimmer.

“It was just about him solidifying himself with all of the bad rhetoric that he gets all the time about this or that,” Zimmer said. “I just felt like it was time to tell a lot of people that he’s our guy and he did it.”

The Ravens come in having won 12 straight and with the best record in the league.

They have run over — and past — teams all season, with Jackson and running back Mark Ingram leading the way. Baltimore finished the regular season with 3,296 yards rushing — the most by a team in NFL history. The runnin’ Ravens also averaged 206 yards per game, the first team to average 200 or more since 1977.

So the Titans will certainly have their hands full — or they at least hope to be able to make enough tackles to keep Jackson and the Ravens from getting into a rhythm. Jackson led the league with 36 touchdown passes while also setting an NFL record for quarterbacks by rushing for 1,206 yards.

“He’s definitely a different beast, man,” Titans defensive lineman Jurrell Casey said. “Not one guy in the league now or in the past that can match up and compare to what that guy can do.”

Ryan Tannehill isn’t anywhere near as dynamic as Jackson, but he has been solid since taking over as the Titans’ starting quarterback. He’s 8-3 and led the NFL with a career-high 117.5 passer rating while throwing 22 touchdown passes and six interceptions. Derrick Henry led the league with 1,540 yards rushing during the regular season and went for 182 and a TD last week while helping power the Titans past Tom Brady and the defending Super Bowl champion New England Patriots.

“The key to stopping play-action is stopping the run game,” Ravens safety Earl Thomas said. “I think when the run game gets going, that’s when the play-action shot is available, because the defense is so aggressive trying to stop the run. So if we knock that out from the start, I think we’ll be fine.”

Last week was all about comebacks for the Texans.

Star defensive end J.J. Watt returned from a torn pectoral muscle that was expected to keep him sidelined until next season. Instead, he was back on the field and made a key sack against Buffalo.

Oh, and a 16-0 deficit was no match for Deshaun Watson and the Texans, who stormed back to beat the Bills 22-19 in overtime.

The next test is the Chiefs at Arrowhead Stadium — where they’ve proven they can win after beating Kansas City 31-24 in October.

The Chiefs’ defense has gotten a lot stingier since then, though, allowing a total of 69 points in the last six games — all victories.

Mahomes has the offense rolling again and is the first player in franchise history to pass for at least 4,000 yards and 25 or more touchdowns in consecutive seasons — despite missing two games with a knee injury. The key for Houston’s defense, though, might be making sure it knows where Travis Kelce is at all times. He became the first tight end in NFL history with at least 1,000 yards receiving yards in four straight years.

“They’ve got playmakers all over who can do many different things,” Watt said.

Russell Wilson and the Seahawks have been a tough team to face at home for years, using their ear-splitting “12th Man” crowd to overwhelm opponents.

They flipped the script this year.

Seattle is 8-1 on the road, including a 17-9 win at Philadelphia last Sunday. They’ll have to keep that road warrior mentality going at Lambeau Field.

Still, Seattle won’t be fazed, especially if its defense puts together another impressive performance like last week’s, when the Seahawks had seven sacks to set a franchise postseason record. They’ll have to do it against Rodgers, who is right at home in the playoffs. He ranks fifth in NFL postseason history with 36 touchdown passes.

“They’re tough to beat when they’re away from their home stadium, which is kind of an outlier in this league,” said the Packers’ Matt LaFleur, who is the fifth rookie coach to win 13 or more games in a season.

By Pablo Gorondi Associated Press BUDAPEST, Hungary (AP) — Although she turned 99 on Thursday, even a 9-year-old would have... read more