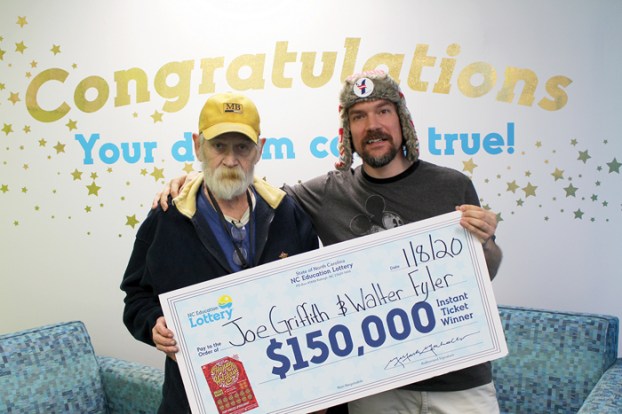 N.C. Lottery Housemates Joe Griffith and Walter Fyler scratched off a big win of $150,000 in the lottery.

SALISBURY – Joe Griffith and Walter Fyler of Salisbury said they plan to get a new home after they won a $150,000 lottery prize.

The the friends and housemates, good luck started Saturday when they stopped at the Murphy Express on Freeland Drive in Salisbury and bought six Happy Holidays scratch-off tickets. They waited until later that afternoon to scratch them.

“I was taking a nap when Joe scratched them,” Fyler said. “I woke up to a knock on my door and Joe asking, ‘Are my eyes deceiving me?’ I thought maybe he won a few hundred dollars, but when I saw the three zeros, I was like, ‘Wow! It actually happened.’ I jumped and clicked my heels. It was exciting. ”

Griffith and Fyler claimed the prize Wednesday at lottery headquarters in Raleigh. After required state and federal tax withholdings, they split $106,126.

The $5 scratch-off ticket launched in November 2019 with three top prizes of $150,000. One top prize remains. This month, players can also enter their holiday scratch-off tickets into a second-chance drawing for a chance to win $50,000. The deadline to enter the Feb. 5 drawing is Friday, Jan. 31.

Ticket sales from games like Happy Holidays make it possible for the lottery to raise more than $700 million a year for education. For details on how lottery funds have made a difference in all of North Carolina’s 100 counties, click on the “Impact” section of the lottery’s website.

Trooper: No charges in officer-involved crash

By Shavonne Walker shavonne.walker@salisburypost.com SALISBURY — No charges will be filed in connection with an officer-involved car crash Friday night,... read more