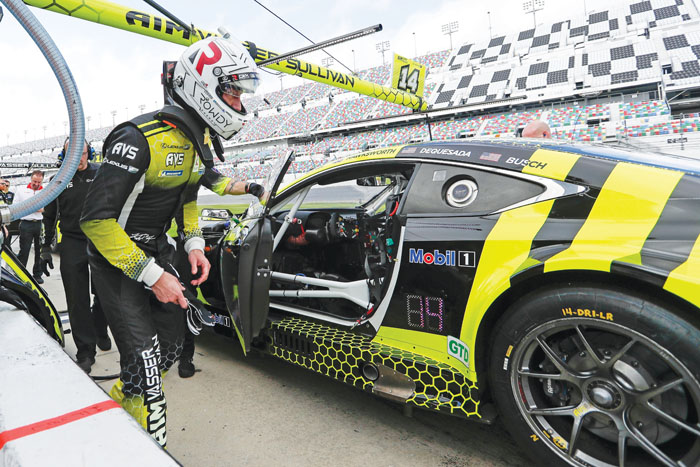 Kyle Busch climbs in his car for a turn to drive during testing for the upcoming Rolex 24 hour auto race at Daytona International Speedway, Friday, Jan. 3, 2020, in Daytona Beach, Fla. (AP Photo/John Raoux)

DAYTONA BEACH, Fla. (AP) — Fresh from a holiday trip to the Bahamas, NASCAR’s newest two-time champion raced back to the track to open the new year.

Kyle Busch stepped out of his comfort zone at Daytona International Speedway on Friday, pulling on a white helmet adorned with his nickname “Rowdy” and climbing into a Lexus RC-F to test for the upcoming Rolex 24 at Daytona. The prestigious sports car race always features some of the top talent in the world, and Busch just might be this year’s main attraction.

Last year’s running of the twice-round-the-clock endurance race featured two-time Formula One champion Fernando Alonso and former CART champion Alex Zanardi, who raced for BMW without his prosthetic legs and relying on a specially built steering wheel to control the car. Alonso and Zanardi stole the spotlight from a stacked field that includes champions from racing series all over the world.

This year, the group includes Busch, who wrapped up his second NASCAR title less than six weeks ago.

He’s driving for Aim Vasser Sullivan in the stacked GTD class — at 18 entries that class has the most in the field — and drew the biggest crowds Friday as he prepped for his first stint in the car. Busch had one day of simulator work with Rolex teammate Jack Hawksworth before the test and recognized quickly what he needs to work on to be ready for the Jan. 25 race.

Because the Vasser Sullivan team races in a lower class, Busch will not be in contention for the overall victory. He will also be mired in traffic, potentially at night, stuck behind slower cars piloted by drivers with far less experience. Busch brought his regular spotter from NASCAR to assist, but can’t realistically gauge the difficulties he may face until race time.

For now, he has to figure out the anti-lock braking system, which is foreign to his regular car.

“I am used to our big, heavy stock cars where you have to start the slow down process way early, and the braking zone is forever and by the time you turn in you’ve got to be off the brakes, otherwise the inside wheels will lock up,” Busch said. “Completely different techniques with these cars. You can just drive the snot out of them, you can just throw it off the corner as far as you feel like you can get in there and stomp the pedal as hard as you think your leg will allow you to do it.”

Even out of his element, in a new car and a different series, Busch remained both demanding and exact in how he likes his car to feel. During an early debrief, he “suggested we get a little softer and they said ‘We’re as soft as we can get,’ and I said ‘Well, that ain’t soft enough.’”

His debut in the Rolex, the unofficial opener of the racing season, will be closely watched but this race is rich in story lines.

Wayne Taylor Racing is the defending race winning team but returned only two members (Renger van der Zande and Kamui Kobayashi) to its four-man roster. Alonso won’t be back amid speculation he will return to the Indianapolis 500 this year and has been replaced by five-time IndyCar champion Scott Dixon.

Dixon became available when Chip Ganassi shut down his sports car team at the end of last season because Ford ended its program.

Taylor also hired Ryan Briscoe, a former Rolex winner for Ganassi, to drive for the team full-time as a replacement for Taylor’s son, who earned a factory-backed job with Corvette Racing this season. The decision to leave his father was difficult for Jordan Taylor, but an opportunity he could not turn down.

The Taylor team in its Cadillac will compete for the overall win against Mazda Team Joest, which this week announced former Indianapolis 500 winner Ryan Hunter-Reay will be part of the lineup, and Acura Team Penske, which is seeking its first Rolex victory in three tries since Roger Penske returned to the series.

Juan Pablo Montoya and Dane Cameron teamed to give Penske the overall IMSA championship this past year, and they’ve got reigning Indy 500 winner Simon Pagenaud on their team this year. The second Penske car of Helio Castroneves and Ricky Taylor will be joined by Alexander Rossi, another Indy 500 winner.

“When you drive for Roger, the goal is to win every race, every time out,” Montoya said. “So the pressure is there.”

The event also features 18-year-old Hailie Deegan, a rising star in motorsports recently named a development driver with Ford Performance. She will run select sports car events in the IMSA Michelin Pilot Challenge this season and turned her first laps with teammate Chase Briscoe on Friday.

MOORESVILLE (AP) — Team Penske has overhauled the crew chief assignments for all three of its Cup Series teams.

Keselowski and Wolfe had been paired together since the 2010 Xfinity season. They were paired together in Cup in 2011 have won 21 races since then. Their split leaves 2014 champion Kevin Harvick and Rodney Childers as the longest active paired driver/crew chief combo (since 2014) in the Cup Series.

Logano and Gordon had worked together since 2013, winning 21 races and the Cup title. Blaney had Bullins as his crew chief for all 162 career Cup starts and three wins since 2014.

“As we do after the completion of each season, we evaluated what we can do to better achieve our goals and we felt it was time to make these changes to better position us to reach our potential,” team owner Roger Penske said. “We are fortunate that we have three very strong leaders in Paul, Todd and Jeremy, who work with experienced and talented crews. Pairing each of these winning teams with different drivers and cars should provide new energy and a fresh approach for the 2020 season.”