Granite Quarry changes where ‘fish arcades’ can open in town 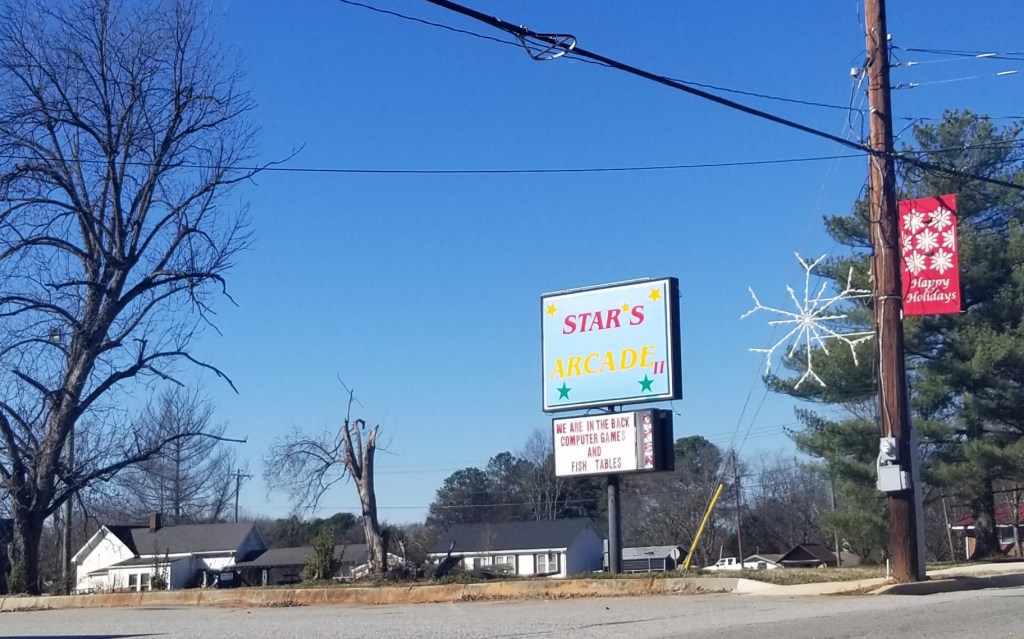 Carl Blankenship/Salisbury Post - The sign for Star's Arcade in Granite Quarry which advertises fish tables. The business was the victim of an armed robbery in December.

GRANITE QUARRY – New “fish arcades” or electronic gaming businesses will have to look at different locations to operate following a change this week by the town’s aldermen.

Interim Town Manager Larry Smith said current electronic gaming businesses in town are not affected. They are protected as having legal nonconforming uses, being grandfathered in layman’s terms. And he said these kinds of changes to zoning ordinances are standard, noting that one gaming facility opened in town and then another opened nearby.

“You want to look to make sure your uses are not clustered so much,” Smith said.

Smith said it is legal to restrict zoning to less-desirable areas for business and that the town stays on track with its growth plan.

But the change comes at a controversial point for “fish arcades” in the state. Video poker machines have been banned in North Carolina for more than a decade, and a new trend of electronic gaming has appeared in the past few years, with cash payouts.

What’s more, on Dec. 18 the Granite Quarry-Faith Joint Police Authority responded to an armed robbery at Star’s Arcade, a gaming establishment a few hundred feet from Granite Quarry Town Hall. The clerk in the arcade was robbed at gunpoint, with $800 in cash and $1,000 of recording equipment are reported stolen in connection to the incident.

The Star’s Arcade sign advertises fish tables, which look like large poker tables with controls for multiple players and a large display in the center. The game involves putting cash into the machine, playing by certain rules to shoot different fish and cashing out.

The games first appeared in southeast Asia about a decade ago and now occupy a gray area in gambling laws. Fish game tables were banned in Greensboro in 2017 after businesses with them began to be associated with violent crime.

Granite Quarry aldermen delayed taking action on a recommendation from the town’s Planning Board in October that would have made the same zoning change.

Instead, in 2019, aldermen placed a 90-day moratorium on more of the businesses opening in town. Aldermen also approved a change to the UDO in 2018 that put the previous zoning standards for electronic gaming businesses in the highway and central business districts.

At the time, Town Planner Steve Blount told the board the town cannot zone something out of business that’s legal in the state.