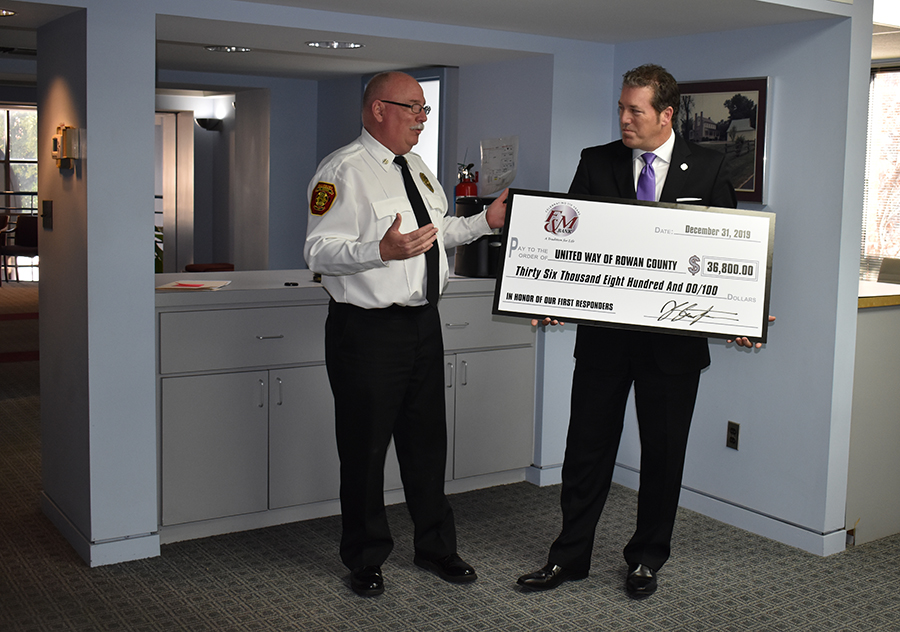 SALISBURY — In a room full of first responders, F&M Bank Chairman and CEO Steve Fisher got the Rowan County United Way across the finish line.

The United Way’s campaign in 2019 was led by Salisbury Fire Chief Bob Parnell, whose job was to raise $1.525 million nonprofit organization. Parnell and the United Way members were short by 5% at the last campaign report meeting in November.

Parnell said 95% was still a success, but the goal was 100%. Firefighters wouldn’t leave with 5% of a fire still burning, Parnell said.

Jackie Harris, who recently retired from the United Way, continued to make phone calls to get the campaign closer to its goal. According to Parnell, Harris inched toward to the goal until her final days and knocked it down to 3% short of goal at her retirement last week.

“This is where Steve Fisher steps up and demonstrates the community leadership that F&M and the Fishers have put into this community for many, many years,” Parnell said. “This year is still yet one more excellent example of being a generous community leader.”

Fisher said the 2019 campaign was special. It was in which the United Way used its community impact model, which directed money to programs focused on substance abuse, mental health, healthy lifestyle behaviors and basic needs.

It also was led by first responders.

“This years campaign is put on the backs of our first responders, who are our best and brightest in this community,” Fisher said. “They put their commitment, their lives on the line every day for us and they recognize the need for United Way in this community because they see every day the impact that they have on the people that they are serving.”

“We really don’t know what to say, except for ‘thank you and we’ll continue to work just as hard every day for our community,’” Parnell said.

Reaching the fundraising goal was particularly special, as it was Harris’ last campaign with the United Way, Fisher said.

“The reason why it was so easy to step up and write the last check is because your last campaign had to be a success,” Fisher said. “Your entire career here was a successful. With you walking out of the door, there was no other way to do it than by doing it meeting your goal.”